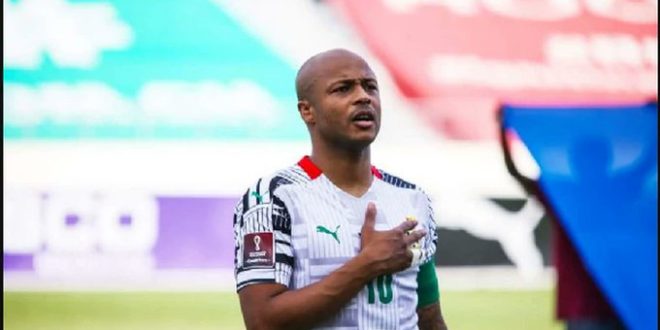 The Black Stars of Ghana captain, Andre Ayew, says he dreams of winning a major trophy for the Black Stars; whether that’s the Africa Cup of Nations title or the FIFA World Cup trophy.

Ayew became captain of the senior national team in 2019, and led the team to two AFCON tournaments where they were knocked out in the round of 16 and the group stages in 2019 and 2022 respectively.

The 33-year-old has already tasted glory as captain at youth level, leading Ghana to the FIFA U-20 World Cup trophy in 2009, the only African country to win the trophy till date.

The Al Sadd forward wants to achieve a similar feet with the Black Stars, as the team prepares for the 2022 FIFA World Cup in Qatar.

“For myself, to be real, I don’t have personal targets. The only personal target I had— and still have — since I joined the Black Stars was to win a trophy with the team. That’s my only target and I’ve been close a number of times (the 2010 AFCON and 2015 AFCON final).

"Everything is in place for us to have a successful World Cup".

Black Stars captain Andre Ayew believes that the team has the right ingredients to succeed in Qatar. #3Sports pic.twitter.com/GjxKdItqdK

Ghana has been paired with Portugal, Uruguay and South Korea in Group H at the 2022 World Cup set to begin in Qatar on November 20, 2022.

Ayew concedes the group is difficult for the Black Stars, who have qualified out of the group stages in two of their 3 World Cup appearances, only failing to do so in 2014.

“It’s a tough group, no doubt about it. The first match is against Portugal who are one of the favourites in the tournament, but we are ready. As I said, we have the players, we have the quality and the staff to help us go through this.

“But if you look at all the teams they are ranked higher by FIFA than us, so on paper they are favourites and we are the underdogs. We take it like that,” he concluded.

The Black Stars have been preparing for the mundial with friendly games in September.

See also  Andre Ayew: “I Have Not Been Feeling Well For The Past Two Days Before Morocco Game"

I'm Adwenpa-Hene |Blogger & Broadcaster Journalist. I am the CEO and manager of this noble website. I publish on Entertainment, Sports, Politics, Lifestyle, and Technology. You can also follow Us on : YouTube Channel - My Ghana Media TV, Facebook - MyghanaMedia TV , Twitter - @MyGhanamedia2 & Instagram - My Ghana Media TV. Email Address: [email protected] Contact Us: 0200818719
@@MyGhanamedia2
Previous NMC Releases Results For August 2022 Licensing Exams
Next Apart From Some Senior Players, No One Is Guaranteed A Place In The Black Stars’ World Cup Squad – Andre Ayew