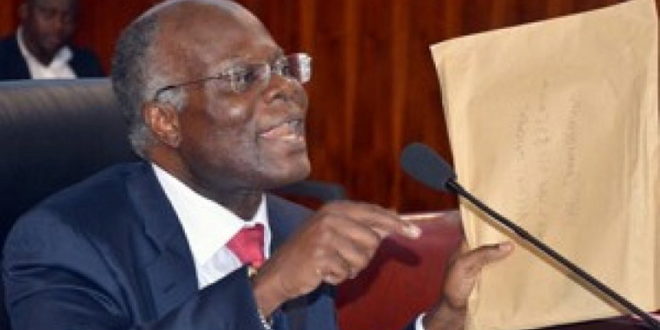 The Member of Parliament for Adansi Asokwa, Mr Kobina Tahir Hammond has taken a dig at some irate youths who booed at President Akufo-Addo at the Global Citizen festival.

KT Hammond has described the action as backward and smacks of unintelligence which must not be countenanced at all.

The Member of Parliament who addressed journalists in Parliament Tuesday, September 27, 2022, said he has never in his life seen such an act before.

He described the move as undemocratic and unprecedented in the political history of Ghana.

“I was petrified. Basically I haven’t seen anything of this sort in Ghana before. We shouldn’t start things which become precedents. You can’t handle them.

“You let the genie out of the bottle. It becomes very difficult. I haven’t seen anything like this. Even on political platforms we don’t do things like these.

“I think it is unfair. We must be ashamed of ourselves. I don’t think it is a proper development for us. This is not democracy. This thing has now developed into political discourse in Ghana. It’s degenerated into insults. Too much shouting connotes an absence of intelligence thinking,” he asserted.

After the President was booed at during his speech at the Global Citizen concert, the NPP blamed the NDC for being behind the incident.

They said the “away” “away” chants from a section of the youth aside from the hooting and booing is nothing spontaneous that could come out naturally from well meaning Ghanaians rather than an orchestration from the opposition.

The NDC, also in response described the allegations as a means the government is employing to give a deafening ear to the plight the citizenry have been subjected to.

The NDC described the incident as a vote of no confidence from the youth.

But social media users are of a different view.

KT Hammond is quoting some 12th century proverb to impugn that young people are empty-headed.

Some of these old men think the youth are just aimless and thus parliament and other offices must be occupied by grey-hairs. Yet they’d go and kneel before Emmanuel Macron for loans

KT Hammond say you people no get sense.. wild

When the musician said adulthood Na scam she was referring to KT Hammond.Not all leaders speak wisdom 😭😂

An Elder who lies, loots and deceives the youth does not deserve respect from the Youth. Someone should tell KT Hammond that.

If we start to hold some of these politicians accountable in their various constituencies, leaders like Hon. KT Hammond won’t describe the youth in such a tone/words. We’ve seen some grown up leaders in this country who have equally taken decisions that won’t help generations.

The likes of KT Hammond and others never saw this happen to Mahama in the UK. Becos it suited them then , they kept quiet. Like they say abt raising a viper for a pet, the day it grows and start biting, it will begin [email protected] pet owner. They should expect more and worse … pic.twitter.com/WvSOVjTxJQ

Lawyer Okudzeto and KT Hammond deɛ dem never dey respect the youth of Ghana ooo
They think we have even had it easy to even have a say in national discussions
Left to them, some 24 elders in a room should make every decision about Ghana for the 30.8m of all of us

I agree with Hon. KT Hammond on his expression about today's youth. You may disagree, and that's fine. But whatever he said is the truth.

What's happening on Social media is the testament of his claim.

Today's youth cannot disagree without insult. We are certainly not….

In fact, I think it's time some of our leaders begin to respect we the youth of this country.
What is this from KT Hammond? https://t.co/T8KRhMZPhi

KT Hammond en head like “Into The Bad Lands” sia sem sei . When we were voting it’s Abrewa en thumb we use as youths https://t.co/ECxA7GBKkI