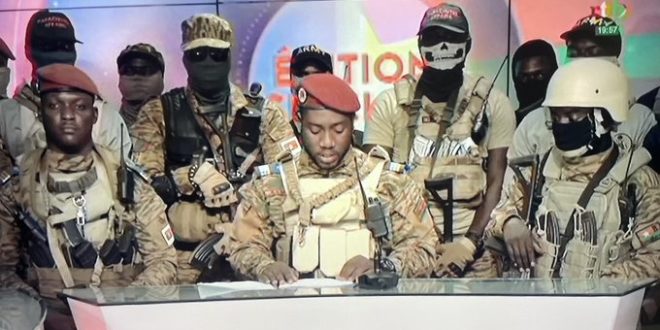 An army captain in Burkina Faso has announced on national television that he has ousted military leader Lt Col Paul-Henri Damiba.

Ibrahim Traore cited Lt Col Damiba’s inability to deal with an Islamist insurgency as the reason.

He also announced that borders were closed indefinitely and all political activities were suspended.

But his administration has also not been able to quell the jihadist violence. On Monday, 11 soldiers were killed when they were escorting a convoy of civilian vehicles in the north of the country.

Earlier on Friday, Lt Col Damiba urged the population to remain calm after heavy gunfire was heard in parts of the capital.

More than a dozen armed soldiers – most with their faces covered – appeared on the Radio-Television broadcaster shortly before 20:00 local time.

“Faced with the deteriorating situation, we tried several times to get Damiba to refocus the transition on the security question,” said the statement signed by Traore.

“Damiba’s actions gradually convinced us that his ambitions were diverting away from what we set out to do. We decided this day to remove Damiba,” it said.

Before dawn, shots and explosions were heard in the capital, Ouagadougou, some of them coming from near the presidential palace and main military barracks.

After sunrise, the normally bustling city was largely deserted, with soldiers on the streets blocking some roads and guarding key strategic points.
State television had stopped broadcasting and more gunfire was heard later in the day.

Lt Col Damiba said there was a “confused situation” created by “mood swings” among some soldiers as rumours of a coup intensified.

Urging people to remain calm and avoid social media speculation, the military leader said there were “negotiations under way to bring back calm and serenity”.

“We have more than what it takes to win this war,” the junta chief said when he was sworn in as president in February.

But many citizens do not feel any safer and there have been protests in different parts of the country this week.

On Friday afternoon, some protesters took to the capital’s streets calling for the removal of Lt Col Damiba.

It’s the 2nd coup in Burkina Faso in 8 months & the 6th in West Africa in just 2 years.

The Islamist insurgency broke out in Burkina Faso in 2015, leaving thousands dead and forcing an estimated two million people from their homes.

The country has experienced eight successful coups since independence in 1960.

There you have it again. Coup confirmed in #BurkinaFaso, Captain Ibrahim Traoré is new military leader #iwil pic.twitter.com/8AXJZ5rdze

Soldiers are on the streets and heavy gunfire has been heard near the main military camp and residential areas of Burkina Faso’s capital https://t.co/KLd8DXFEKx pic.twitter.com/4hEWBKlsl7

Units of the armed forces, including special forces, under the command of Captain Ibrahim Traore carried out a coup, overthrowing the government of Colonel Sandaogo Dambia Paul Henri, pic.twitter.com/ggyRF18Bdb

Another coup has taken place in Burkina Faso. https://t.co/HSZhHodOV9

Coup confirmed in Burkina Faso as army Captain Ibrahim Traore leads removal of military govt- the country’s interim president and January 2022 coup leader Lt-General Paul-Henri Damiba has been removed from office.
This is the country’s 2nd coup this year. pic.twitter.com/tnfRJVW195

Reading about Burkina Faso every few months absolutely breaks my heart. Solidarity with The Incorruptible People ✊

“Without political education, a soldier is only a potential criminal.”
– Thomas Sankara pic.twitter.com/5Q3cmYDcXS