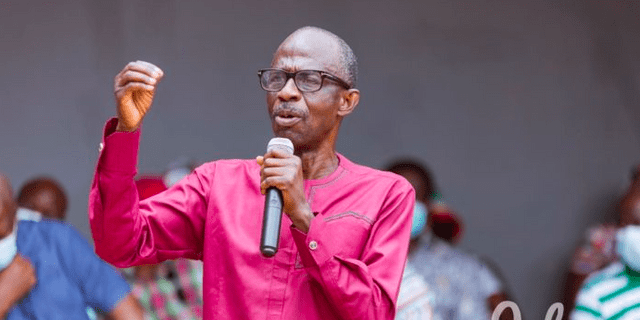 The National Democratic Congress (NDC) contends that the party’s contribution to the development and stability of the country is unmatched.

The party arguably is the longest-serving government in the history of Ghana, and its leadership says the history of the country cannot be well captured without the mention of it.

These were said at the launch of the Administrative history book of the NDC in Tamale in the Northern Region.

The General Secretary of the party, Mr. Johnson Aseidu Nketiah, speaking at the launch outlined why it is important for the party to document its own history.

“The purpose of writing history is to gather our current knowledge and transfer it to the future generations and to make sure where we made mistakes they will do better and write it successfully so that society can progress. We think that the history of Ghana will not be complete if we do not consciously write about the National Democratic Congress.”

”The contribution of the NDC towards the sociopolitical and economic development of this country can never be wished away. Indeed, it is so enormous that Ghana’s history would not be complete without adding what the NDC has done”.

Touching on the content of the book, the General Secretary said it is the NDC that brought the threshold on the political and economic stability in the country.

“The NDC moved the economy into positive growth and since then the GDP growth of the country has never gone back into negative growth again, we established that threshold of Economic and political stability of the country”.

On her part, the former running mate of the NDC, Professor Naana Jane Opoku-Agyemang said that just as the issue of the founder of the country has been manipulated, it is important for the party to document its own history to avoid any misrepresentation.

“You tell your story so that nobody uses an apostrophe to change the hard-won reputation of others so that the founder which is singular does not become founders’ plural”.

The National Chairman of the party Mr. Samuel Ampofo underscored the party’s contribution to the development of the country.

He said the contribution of the party to the history of Ghana is unmatched.

“Launching the book that talks about the Administrative history of the NDC have come at a very tightening opportunity, especially at the time that the party is celebrating its 30th milestone and this is the icing on the coke for the celebration of 30 years of progressive contribution of our party towards the socio-economic development of our country. It is, therefore, necessary for us to know where we have come from, where we are today and where we are going in future.”

Alhaji Hudu Yahaya intimated that it is the NDC that brought development to the northern sector and that if history is not told, some people will one-day claim credit for things that they have not done.

“A lot has been achieved for the country by the NDC and if it is not recorded, it would be lost. When you tell a lot of the youth in Tamale that in secondary schools, law and order broke down in Tamale that we used to have blackouts, and examination results became very poor because there was no power. It was the PNDC that brought Akosombo to the Northern sector in Tamale in 1991. It is NDC that brought development to the North”.

One of the authors of the book, Albert Tanbot the General secretary of the party’s school Alumni Association, said it is their contribution towards ensuring the victory of the party in the next election.

See also  Akufo-Addo Is Not Against Mining – Jinapor

“The current situation we have found ourselves in, we have taken it upon ourselves to use the academic arm to support the party to achieve its aim of winning 2024 elections.”

”The coming election is an election of all hands on desk. We are leaving no stone unturned to make sure come 2024, the NDC comes back to power and by getting that opportunity we need to use it to empower our base”.