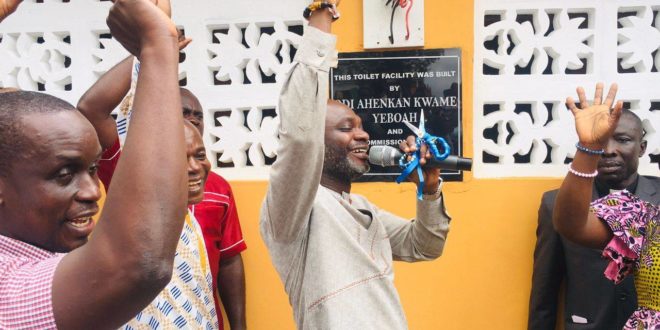 The facility which is a 6-seater toilet, is to help improve sanitation and hygiene in the school.

The commissioning witnessed the attendance of Teachers, Town folks including opinion leaders, Presbyterian Church Leaders, the Management of the Akyem Aboabo Presby School and Assembly Member for the area who graced the event with their presence.

Speaking at the commission of the facility, Mr Odi Ahenkan Kwame Yeboah said that “About three, four years ago, I heard that some of the school children of Aboabo Presby Primary School were resorting to the bush because of lack of a toilet facility. When I heard the news and as a former student of the school, I felt very touched so I came to meet the management of the school, the Presbyterian Church leaders and the headmaster and the board. They gave me a piece of land that if I could help they are willing to allow me to also put up a facility. He further said the intervention has led to the construction of a 6-seater ultra-modern toilet facility as an addition to the school’s infrastructure.”

He said he financed the project from his funds because that drives him as it remains his mission to make the world a better place.

Mr. Odi Ahenkan added that he was using this as a form of motivation for the students.

He said, “Am doing this to motivate the schoolchildren and to encourage them and that when they also become old students, they should do better than am doing. This is just an example and it is not the end, I will continue to put our resources together to help the school to become better.”

According to him, it is about time the people of Akyem Aboabo and it surrounding communities unite to develop their community instead of waiting for government. 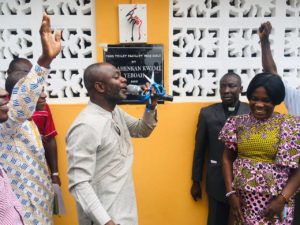 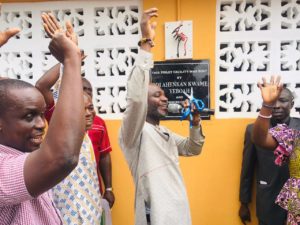 He stated that, most of the people in Akyem Aboabo are cowards who do not realize that there were people from the past who sacrificed their dignity and life to gain freedom for the town and the country as whole.

He also applauded the teachers and headmaster of Akyem Aboabo Presbyterian primary school for their hard work and determination and their continued passion and willingness to give the schoolchildren the best of education.

He therefore adviced the headmaster to run the school like in the olden days where students were assign roles by schedules organised in section in letters A, B, C among others as was done with the responsibility of planting flowers to beautify the school compound.

He pledged his utmost support for the school relating that, he will find a way to renovate Akyem Aboabo kindergarten block in order for the students to learn in a serene environment and become better people in the near future.

The Headteacher of the Aboabo Presby Primary School  described the intervention by the visionary old student in the name of Odi Ahenkan kwame as timely since the continuous usage of open spaces for nature’s call by schoolchildren gave the school a bad name.

The deputy municipal director of education for Birim Central Municipality, Madam Bernice Asante speaking on behalf of the school showed much appreciation for the dedicated and selfless service from Odi Ahenkan and more importantly having Akyem Aboabo his community at heart and always doing his possible best to ensure development for his people.

The Schoolchildren told MyGhanaMedia.com that the provision of the lavatory facility gave them relief as it will enhance sanitation in the school.