Breaking News
Home / GENERAL NEWS / Ken Ofori-Atta Reacts To Critics: “I Have Gone Through All The Pains And Aches “ 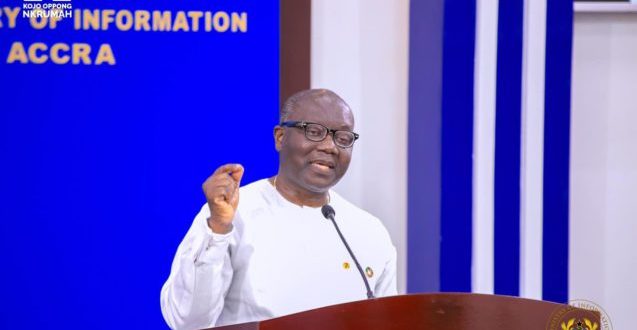 Ken Ofori-Atta Reacts To Critics: “I Have Gone Through All The Pains And Aches “

The Finance Minister, Ken Ofori-Atta, has replied to his critics who have called for his head.

According to him, he has felt the ‘pain and aches’ but is more concerned about how the country surmounts its challenges.

“You have a Finance Minister who has gone through all the pains and aches, and nobody can really come and say ‘we don’t understand what we’re doing’,” he stated.

Speaking to members of the Association of Ghana Industries (AGI) on Thursday, Mr Ofori-Atta expressed confidence in the country, saying it is purposed for greatness.

At this time when the country is facing severe economic hardships, he wants Ghanaians to discuss how the country’s resources can be utilised effectively to ensure growth and development instead of the heightened calls for his resignation.

Over the past weeks, Ken Ofori-Atta has been under intense pressure to step down over what is believed to be gross mismanagement of the Ghanaian economy.

Members of his own party, including some Majority MPs, have also thrown their weight behind the calls and have threatened to boycott government business if he is not sacked.

But Mr Ofori-Atta has rallied the support of Ghanaians in taking the country out of the woods.

“Let me assure you all that your best bet is still Ghana; we can do it and we should do it. The question is what resources do we have and how we’re going to deploy them in the nation that we have.

“… and how do we stand firm in very difficult circumstances by being very confident that the nation is purposed for greatness and you are blessed to have the opportunity to lead where we are going.”

Listen to Ken Ofori-Atta in the audio below

The Minority in Parliament has already filed a motion of censure against the Finance Minister, Ken Ofori-Atta.

According to them, the Minister is incompetent and is to blame for the current economic woes of Ghanaians.

In an interview with JoyNews, the Minority Leader – Haruna Iddrisu – said they are hopeful by November 10, they can conclude processes to remove Mr Ofori-Atta.
JoyNews/AdomNews · Majority Leader declares entire Caucus now in support of Ofori-Atta’s dismissal

The motion has been admitted by the Speaker of Parliament, he said.

Currently, the entire Majority Caucus is in support of the calls for President Akufo-Addo’s cousin to be sacked.

“Even though the issue started with the group of 80 plus, the caucus meeting aligned with the position of that group, so it is no longer the cause of the 80 plus MPs. It is the agenda for the entire caucus and we are having some discussions on that,” the Majority Leader, Osei Kyei-Mensah-Bonsu disclosed.

President Akufo-Addo has asked for more time for the Finance Minister to conclude negotiations with the International Monetary Fund (IMF) before any talks of resignation.

Documents available to JoyNews suggest a deal could be reached with the IMF in three weeks for a $3 billion balance of payment support.

This, the President believes, could be disrupted if Ken Ofori-Atta is sacked or forced to resign.

This was an outcome of a meeting held by President Akufo-Addo and NPP Members of Parliament over the demand for the finance minister to be sacked over his handling of the economy.

Some NPP MPs say several efforts to have government address the plights of their constituents with regard to the ailing economy had proved futile.