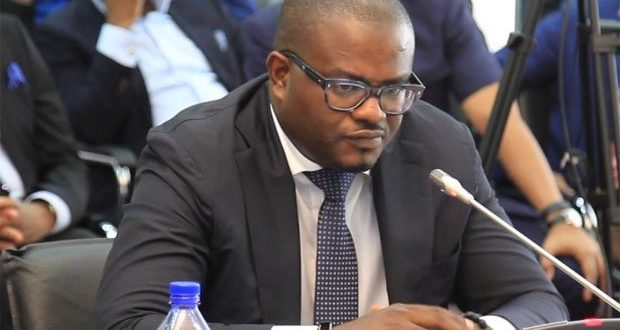 The dismissed Minister of State at the Finance Ministry, Charles Adu Boahen, has denied allegations of influence peddling and using the name of the Vice President, Dr. Mahamudu Bawumia, to receive bribes from investors.

An investigative piece by ace journalist, Anas Aremeyaw Anas, which is yet to be aired, allegedly captures Mr Adu Boahen, asking an investor to pay an appearance fee of $200,000 to enable a meeting between him and the Vice President.

Mr Adu Boahen also allegedly told the undercover investor that he should promise the Vice President of employing some of his relatives to accelerate his investment.

A statement from the Director of Communications at the Jubilee House, Eugene Arhin indicated that the President took the decision after being made aware of the allegations levelled against the Minister in the exposé dubbed, “Galamsey Economy.”

“The President spoke to Mr. Adu Boahen, after which he took the decision to terminate his appointment,”

But in a statement, Mr Adu Boahen stated that there was an attempt to entrap him in 2018 and is innocent of all allegations against him.

He, however, added that he will cooperate with the relevant authorities for full investigations to prove his innocence. 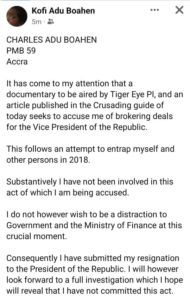 I'm Adwenpa-Hene |Blogger & Broadcaster Journalist. I am the CEO and manager of this noble website. I publish on Entertainment, Sports, Politics, Lifestyle, and Technology. You can also follow Us on : YouTube Channel - My Ghana Media TV, Facebook - MyghanaMedia TV , Twitter - @MyGhanamedia2 & Instagram - My Ghana Media TV. Email Address: [email protected] Contact Us: 0200818719
@@MyGhanamedia2
Previous I Won’t Allow Anyone To Ruin My Integrity –  Dr. Bawumia Reacts On Anas ‘Galamsey Economy Eexposé’
Next Police Arrest 3 Suspects For Disturbances During The Ashanti Regional NDC Executives’ Election