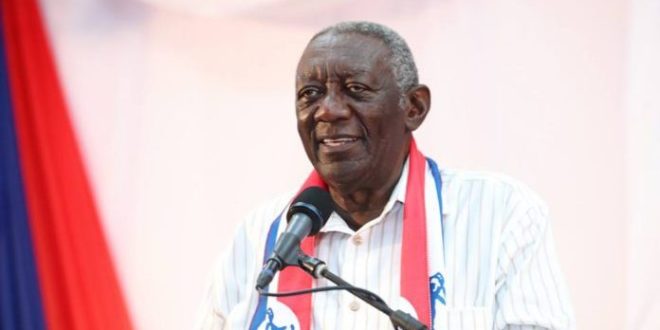 I Have Not Invited NPP MPs Calling For Ofori-Atta’s Exit – J.A Kufuor

Former President, John Agyekum Kufuor, has denied reports stating his intentions to meet NPP members of Parliament who are calling for the sacking of Finance Minister, Ken Ofori-Atta.

According to the former head of state, the said reportage in some sections of the media are false and should be dismissed.

“The Office of Former President John Kufuor has chanced upon some publications in the media, both social and traditional media, to the effect that the former President has extended an invitation for a meeting with him to the almost a hundred NPP members of Parliament who are demanding the sack of the finance minister, ostensibly to dissuade them from their stance.

We wish to bring to the attention of the general public that there is no truth to the said publications”, the statement emphasized.

I have not invited NPP MPs calling for Ofori-Atta’s exit – KufuorA copy of the statement from former President Kufuor’s office, denouncing the allegations of trying to dissuade NPP MPs from calling for Ofori-Atta’s exit
The statement continued, “The office of the former President vehemently detests the developing trend in disinformation that mischievously seeks to draw President Kufuor into issues that he has not commented on”.

It added, “The former President is as concerned as, perhaps more so than, others for the wellbeing and stability of Ghana, and in his own way is doing whatever he can for the nation to get on top of the seemingly intractable difficulties currently engulfing our society, and would be the last person to play petty and uninformed politics in the circumstances”.

“At any time that Mr. Kufuor deems it fit to comment publicly on national issues, he would not hesitate to do so. But, he would definitely not be drawn in, on other people’s terms and agenda”, the statement concluded.

Meanwhile, Finance Minister, Ken Ofori-Atta, is currently responding to questions from an eight-member ad-hoc committee of Parliament, reviewing a motion of censure against him.

The motion, which was filed by the Minority MPs on October 25, is seeking to have him dismissed.

According to the Minority MPs, the Minister has failed in the discharge of his duties, and therefore is unfit to hold office.

In a related development, members of Parliament from the ruling New Patriotic Party (MP), have also announced their readiness to boycott the presentation of the 2023 budget, if Ken Ofori-Atta is still at post.

Like their counterparts in the NDC, they also assert that the Finance Minister is responsible for the country’s economic crisis and therefore should be removed from office.

However, the appointing authority, President Akufo-Addo says he is satisfied with the work of Mr Ofori-Atta, and therefore has no basis to sack him.

This has led to a scuffle between the President and other leading members of the ruling party.

Amidst the controversies, Mr Ofori-Atta will be expected to appear before Parliament tomorrow, November 18, to answer questions from the eight-member ad-hoc committee.

I have not invited NPP MPs calling for Ofori-Atta’s exit – Kufuor
However, it is unclear whether he will appear before the Committee himself or will be represented by his lawyer, Gabby Otchere-Darko, who appearing on his behalf when the proceedings begun on Monday. 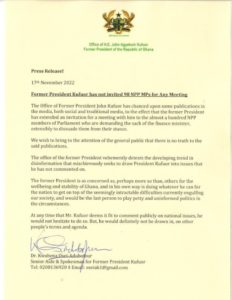 I'm Adwenpa-Hene |Blogger & Broadcaster Journalist. I am the CEO and manager of this noble website. I publish on Entertainment, Sports, Politics, Lifestyle, and Technology. You can also follow Us on : YouTube Channel - My Ghana Media TV, Facebook - MyghanaMedia TV , Twitter - @MyGhanamedia2 & Instagram - My Ghana Media TV. Email Address: [email protected] Contact Us: 0200818719
@@MyGhanamedia2
Previous 25-Year-Old Poses Her Life After Her Friend Beats Her To Death
Next TUTAG Declares Indefinite Strike trike