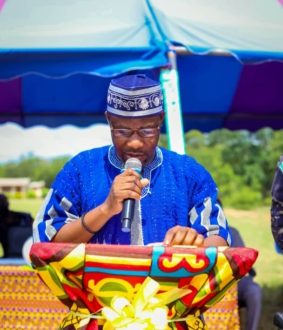 North Tongu DCE: My Life Is Under Serious Death Threats

The District Chief Executive (DCE) for North Tongu, Divine Osborne Fenu has lamented the sad loss of innocent residents of Battor in the Volta Region during the recent clash between two factions resulting from the injunction on the Hogbetsotsoza festival.

According to Mr Fenu, his life is being threatened by some people of Battor even though he has never had any interest whatsoever in the planning of the festival that led to the unfortunate incident.

He noted that the series of attacks on him is worrying and frustrating despite his efforts as the DCE to help resolve the issue with the appropriate authorities.

According to Mr. Fenu who doubles as the Chairman of the North Tongu District Security Committee (DISEC), he finds it extremely difficult to understand why Togbega Patamia Dzekley VII would blame him for the avoidable incident which has claimed precious lives of persons in the Battor township.

The visibly worried DCE noted that Torgbega Patamia Dzekley VII is well aware of the mediation roles the North Tongu DISEC played in the Battor Paramountcy disagreement that was before the Volta Regional Security Council initially.

“The Paramount Chief knows that I am a very loyal citizen and law-abiding and that there is no way I can take sides in the Battor Paramount Chieftaincy issues since I do not have the capacity to,” Mr Fenu said.

He pleaded with the two parties not to tag him in their issues because he is not a royal of the paramount stool but can only perform his role as the DCE.

Mr Fenu was reacting to a call made by Togbega Patamia Dzekley VII to the Inspector General of Police (IGP), Dr. George Akuffo Dampare, Chief of Defence Staff, as well as the Chief of Staff, Madam Akosua Frema Osei-Opare to immediately relieve the Aveyime District Commander, Superintendent George Aboagye and the District Chief Executive (DCE) for North Tongu District Assembly, of their duties in the district.

In a petition to the IGP, Togbega Patamia Dzekley VII who doubles as the Vice President of the Volta Regional House of Chiefs noted that the DCE and the senior law enforcement officer have shown gross incompetence in the North Tongu District that has resulted in the unfortunate loss of five lives at Battor on Friday December 16, 2022.

But in a quick rebuttal, the DCE stressed he is innocent, adding that the opening statement of the petition is instructive, and that meetings were arranged to address the dispute between the two factions.

According to Mr Fenu, he championed these meetings because “by nature, I am passionate about peace development of North Tongu and indeed in the Battor Traditional area.”

“When injunctions were secured against the festival, Togbega knows I played a pivotal role in talking to the stakeholders to give peace a chance. It is unfortunate that the organisers, from Togbega’s office, gave fuel to the celebration, against security advice and court injunctions, and so on,” the DCE stated.

According to Mr Fenu, the North Tongu DISEC picked intelligence that “the usual enthusiasm of the people for the cherished Hogbetsotsoza festival, was taken advantage of by some elements to preach hate against him as the DCE and the security, to the extent that they were willing to attack and visit mayhem on any officers seeking to restrain Togbega’s planning committee and his team from flouting the court order.”

He indicated that “from security intelligence, I was advised to stay off for my safety since they had formed their prejudices already.”

See also  First Lady Must Pay Interest On Allowance; Her Account Must Be Probed – Minority

The DCE noted that Togbega Patamia Dzekley VII has been resolute, not willing to compromise on anything except his demands that the security should agree with him that the alleged removal of the stool father was absolute.

According to the DCE, the security technocrats made it clear that the North Tongu DISEC was unable to arrogate to itself the nonexistent power to adjudicate a chieftaincy dispute between him and his stool father.

“Both claim their respective purported destoolments were nullities. So how do I, a humble public servant, restrain one side and encourage another?

“It is extremely regrettable that this issue, which could have been resolved peacefully, has led to the loss of precious lives.”

He lamented that it was unfair that he is the one being blamed for the issues despite his innocence in the whole case.

“It is unfair to suggest that the DCE is the one to blame for our failure to give peace the chance. If the organisers had listened to DISEC advice, obeyed court orders, heeded security instructions, and so on, we would have averted the unfortunate disturbances,” he said.

Mr Fenu noted that investigations are still ongoing, people are in police custody and due process is being followed and those whose actions have led to the breach of the peace, when found culpable, will face the full rigours of the law.

It would be recalled that five persons including a citizen of Battor who is the Chief of Havorkope in Dzemeni in the South Dayi District were shot dead while several others sustained various degrees of injuries.

The bloody incident follows a clash between some disgruntled members of the Dzekley Royal Family of Kpele and the stool father of the Battor Traditional area in the North Tongu District of the Volta Region.

At a press conference held on November 27, 2022, the stool father, Zikpitor Korsi Hottor announced that he has destooled the Paramount Chief of the Battor Traditional Area, Togbega Patamia Dzekley VII.

The stool father alleged that the Paramount Chief had breached the customs and traditions of the Battor Traditional Area hence his destoolment.

During a gathering on Friday, December 16, 2022 for the firing of musketry in the Battor township ahead of a festival, aggrieved supporters of the destooled paramount chief allegedly clashed with some supporters of the stool father which led to the swath of five people and several persons injured.