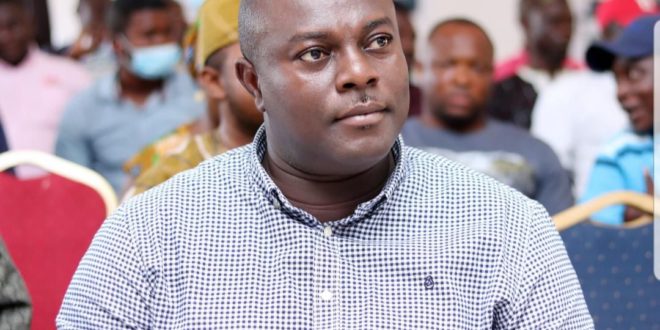 Ashanti Region Chairman of the opposition National Democratic Congress (NDC) Andrews Nana Akwasi has debunked reports that he was snubbed by the National Chairman of the party, Johnson Asiedu Nketia.

“I invited Chairman General [Johnson Asiedu Nketia] to Kumasi for the Akwasidae, [so] how can he snub me?” he quizzed.

He described as miscommunication why his presence was missed at Ambassador Ohene Agyekum’s house, where a cake was cut to celebrate the National Chairman’s birthday, which coincided with the Akwasidae.

“I had earlier spoken with Chairman General to recieve him at the party’s office together with all the executives so we move together. I had no knowledge his campaign team led by my Organizer and Vice had planned a surprise party for him at Ambassador Ohene Agyekum’s residence.

See also  Dr. Bawumia Is Stoned By The NDC And Others Because They See A Lot Of Harvest In Him - Razak Opoku Writes

“That meeting was never communicated to me,” he told William Evans-Nkum.

“But Chairman General called me personally to meet him and his delegation at Manhyia Palace which I obliged.”

Also commenting on why he was not on the dignitaries dais at the Manhyia Palace on Sunday, Nana Akwasi said there was not enough front seats upon his arrival at Manhyia and he didn’t want to break any protocol so he went to sit with the constituency executives and former appointees.

“I joined Chairman General to greet the Asantehene as tradition demands,” he said.