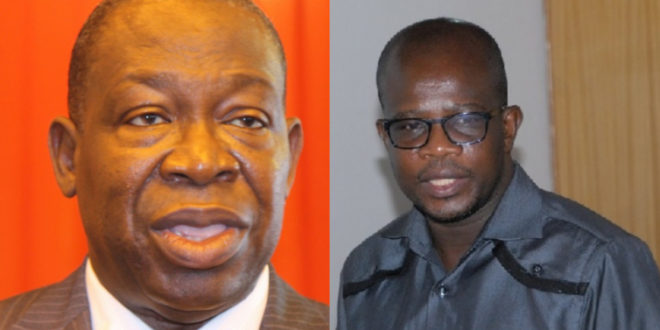 A leading member of the National Democratic Congress (NDC), Dr Michael Kpessa Whyte, is up in arms against Mr Rojo Mettle-Nunoo, also a senior member of the NDC, over a letter he signed on behalf of “Friends of Dr Kwabena Duffour” to the NDC’s Council of Elder, claiming that former President John Mahama was given undue advantage as a potential presidential candidate at the NDC’s 17 December 2022 congress.

Dr Michael Kpessa Whyte and Rojo Mettle-Nunoo in 2021, appeared as witnesses for Mr John Mahama at the Supreme Court when he challenged the validity of the December 2020 election results by means of a petition.

Clearly, Rojo Mettle-Nunoo has fallen out with Mr Mahama and has joined the camp of Dr Kwabena Duffour, who is a potential contender as flagbearer of the opposition NDC for the December 2024 presidential elections.

To register his displeasure with the choice of Rojo Mettle-Nunoo, Dr Kpessa Whyte elected to write to him to express his disappointment with the claims he made in his letter to the party.

“I wish to make a few remarks and observations about a recent letter you signed on behalf of ‘friends of Dr. Kwabena Duffour’ to our party, the National Democratic Congress (NDC) Council of Elders. The letter in question is dated December 23, 2022,” the introduction of Dr Kpessa Whyte’s response read.

“For the avoidance of doubt, I am an ardent and unrepentant supporter of His Excellency John Mahama and firm believer that he, more than anyone else, is our party’s surest bet for 2024 presidential elections, as well as, the person who has what it takes to lead our country’s “second liberation” struggle.

“Just as I support His Excellency John Mahama, I will respect the choices made by others including you. What is unacceptable is the attempt to play victim in your letter when there is no reason to do that.

“In your letter, you claim that the organizers of the party’s recent congress gave His Excellency John Mahama undue advantage to market himself over others,” Mr Kpessa Whyte stated in his write-up.

“I find your claims to be fallacious at best. The party’s recent congress did not depart from the protocols of previous congresses. As far as I know, since the early 2000s former Presidents have always attended and addressed the party’s congress.

“In my opinion, the organizers and His Excellency John Mahama followed the tradition and that should be applauded rather than condemned.

“Sir, your claim is even more problematic given that the party has not given any indications of when presidential primaries will be held let alone open nominations for candidates to file and campaign,” Kpessa Whyte further indicated.

In pointing out his concerns with the letter of Rojo Mettle-Nunoo to the NDC Council of Elders, Dr Whyte posed the following questions;

“Is it your intention to deny Excellency John Mahama his rightful place as former President in the affairs of the NDC just because a member of the party has interest in contesting the presidential primaries?”

“Sir with all due respect, your decision to sign a letter suggesting that you are supporting anybody else besides John Mahama did not only raise serious questions but also lacks emotional intelligence. When did you decide not to support John Mahama again given that you were one of his representatives (myself included) in the Electoral Commission Strongroom?”

“Were you representing His Excellency John Mahama to fail in the 2020 elections so you can opt for another candidate for 2024? Don’t you think you have a moral obligation to stand with John Mahama given your own testimony that the NPP and Nana Addo conspired with the Electoral Commission to steal John Mahama’s victory?”

“I hope these questions will provide you some opportunity to reflect on the implications of your decision,” Dr Michael Kpessa Whyte posited after his three questions to Rojo Mettle-Nunoo in his letter.

Dr Kpessa Whyte ends his piece noting that he sincerely hoped that Mr Mettle-Nunoo will understand his decision to share his observations about the letter to the Council of Elders publicly.

See also  Oppong Nkrumah Claps Back: I Never Said All 16 Flagship Programs Including Free SHS Will Be Reviewed

“Ideally, I would have called to express my concerns privately but since you led the way by sharing your letter to the party’s Council of Elders in public, I cannot but follow your lead. Sir, note that while we are all free to make choices, in the end, integrity matters, so we must all be guided accordingly,” Dr Kpessa Whyte wrote in his response to Mr Mettle-Nunoo’s letter.