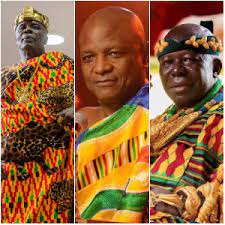 Togbe Afede XIV, the Agbogbomefia of the Asogli State and President of Asogli Traditional Area was born James Akpo on 23 April 1957). He is a twin whose twin brother Philip dies at a n early age.

The great chief was born to Corporal Patrick Akpo and Madam Rose Anyawoe in who in the Volta region.

Togbe Afede XIV is a product of Labone Secondary School in Accra where he excelled in the GCE “A” Level examination in 1976.

He however began his education at Ho Bankoe Roman Catholic Boys School in 1961 and then entered Kpedze Secondary School in 1969, successfully completing his GCE “O” Level in 1974.

Togbe Afede XIV is an alumnus of University of Ghana where he obtained a Bachelor of Business Administration qualification in Accounting in 1979. He also holds an MBA from the Yale School of Management in 1989.

Born Nana Barima Kwaku Duah on 6th May 1950, he rose to become the 16th Asantehene, when he was enstooled on 26 April 1999 and took the kingly title Otumfuo Osei Tutu II.

He is the third son and youngest of the five children (three sons and two daughters) of Nana Afia Kobi Serwaa Ampem II, Asantehemaa (Queen-mother of the Ashanti) and his father Nana Kwame Boakye-Dankwa, who was from Kantinkyere in Ashanti and was also the Brehyia Duke of Asante. Nana Kwame Boakye-Dankwa died on 1st January 2002, in Kumasi, Ashanti.

Otumfuo is a product of the Sefwi Wiaso Secondary School where he obtained his ‘O’ Level and was taught by the late Omanhene of Sefwi Wiawso, Nana Kwadwo Aduhene II who was a cousin of Otumfuo’s guardian uncle, Oheneba Mensah Bonsu, Hiahene.

He then enrolled at the Polytechnic of North London (now London Metropolitan University), where he earned the Diploma in Management and Administration. He was awarded an honorary doctorate by the university at a ceremony at the Barbican Centre on 11 January 2006.

The current Okyenhene Amoatia Ofori Panin has his secondary education at the Abuakwa state college in the Eastern Region. He was born on the 10th October, 1952 as Odehyie Kwame Boakye Ofori Atta to Nana Yaw Boakye and Odehye Abena Akoto into the Asona clan in ER.

He ascended the throne on October 4th 1999, after the passing of his predecessor.

He is the 35th King to have ascended the throne referred to as the Ofori Panin Stool.

I'm Adwenpa-Hene |Blogger & Broadcaster Journalist. I am the CEO and manager of this noble website. I publish on Entertainment, Sports, Politics, Lifestyle, and Technology. You can also follow Us on : YouTube Channel - My Ghana Media TV, Facebook - MyghanaMedia TV , Twitter - @MyGhanamedia2 & Instagram - My Ghana Media TV. Email Address: [email protected] Contact Us: 0200818719
@@MyGhanamedia2
Previous God Has Seen Me Through It All – Dome-Kwabenya MP Broke Down In Tears
Next Ghana’s Cedi To Depreciate By About 22% In 2023 – EIU Report