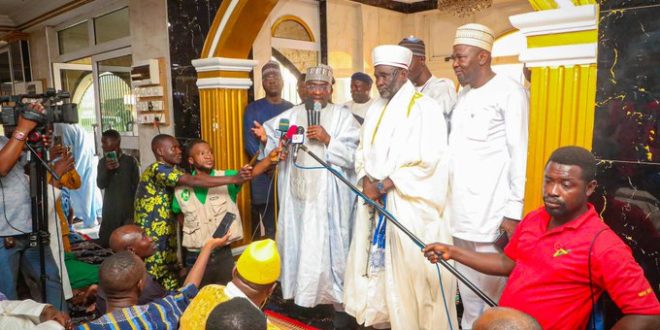 The Vice President of Ghana, Alhaji Dr Mahamudu Bawumia has been hailed by the Northern Regional Chief Imam and the Tamale Central Mosque managers for giving the facility a facelift.

The Northern Regional Chief Imam Shaykh Abdul Salam is full of praise for the generosity of the second gentleman of the land for ensuring that he played a pivotal role in ensuring the facility is completed and ready for use.

Speaking at the official handing over last Friday, Shaykh Abdul Salam thanked Dr. Bawumia for keeping to his word and ensured that the project was delivered as promised.

“We thank the Vice President for his generosity and ensuring that this facility is ready and handed over in a properly refurbished state for our used. We are lost for words in appreciating his gesture”, he praised.

Dr. Bawumia on his part, expressed gratitude to God and the leadership of the Tamale Central Mosque as well as all other who helped him to undertake the refurbishment of the Mosque, which prior to the renovation works was not in the best of shapes.

Writing on social media after participating in a Qur’anic recitation and prayers at the Mosque Friday January 6, 2023, Dr Bawumia thanked all who contributed to the execution of the project.

“This morning, I was at Tamale Central Mosque to participate in a Qur’anic recitation and prayers, led by the venerable Shaykh Babadua. The prayers were to give thanks for the successful completion of refurbishment works on the Tamale Central Mosque, which I undertook.

Later in the afternoon, I joined the Muslim Community for Jummah prayers, led by the Regional Chief Imam Shaykh Abdul Salam.

I thank the Almighty Allah for giving me the strength to undertake the refurbishment of the mosque, as well as to all those who initiated and contributed to the process, especially, the leadership of the mosque. May Allah bless us all,” he stated.

In November 2020, Dr Bawumia pledged to defray debts that had already been incurred in some renovation works exceuted and carry on with the rest of the refurbishment works following an appeal by the Northern Regional Chief Imam Sheikh Abdul Salam Ahmed and Alhaji Opha.

I'm Adwenpa-Hene |Blogger & Broadcaster Journalist. I am the CEO and manager of this noble website. I publish on Entertainment, Sports, Politics, Lifestyle, and Technology. You can also follow Us on : YouTube Channel - My Ghana Media TV, Facebook - MyghanaMedia TV , Twitter - @MyGhanamedia2 & Instagram - My Ghana Media TV. Email Address: [email protected] Contact Us: 0200818719
@@MyGhanamedia2
Previous Ghana Is Dead; Our Leaders Are Only Wishful Thinkers – Clement Adjei
Next Kevin McCarthy Elected As US House Speaker After 15 Tries