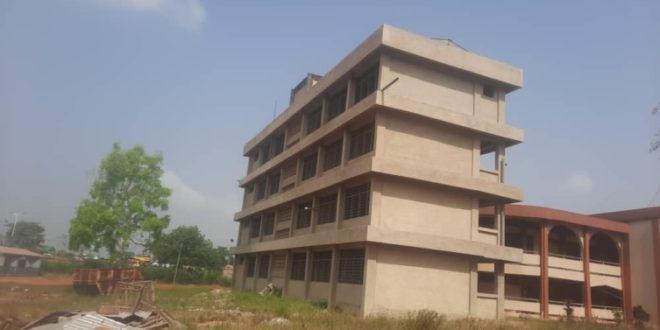 The three-storey complex which was left at the mercy of the weather is now about 80 percent complete with auxiliary facilities.

Speaking in an interview with the DCE, Seth Agbi, he noted that his priority as the DCE is to make sure that the abandoned projects were started immediately to help accommodate the many staff of the Assembly that do not have offices to work in.

Mr Agbi noted that it is sad and unfortunate that the project was left to rot while some offices were congested due to inadequate space.

Mr Seth Agbi noted that there was the urgent need to have more office space for the staff to ease the congestion.

He said the project, which is expected to be completed in June is aimed at improving the efficiency of the staff at the Assembly and also help reduce cost of renting office space outside the premises.

“This project has been abandoned for several years and I couldn’t just look on when my staff needs office spaces to work in and so had no choice than to start immediately I became the DCE” Mr Agbi said.

See also  NDC Is Dormant Party, Not Ready For Power – Director of Political Affairs At Presidency

Mr Agbi noted that plans are far advanced to also construct guest rooms along the river bank just behind the Assembly to improve on the revenue generation.

He urged all to collaborate with the Assembly for more developmental projects to be brought to the district.

Mr Agbi reiterated government’s commitment at making sure that developmental projects are seen in the South Tongu District and beyond.