Breaking News
Home / GENERAL NEWS / Major Mahama Trial: “I Was Throwing Stones At The Deceased In The Video” – Accused 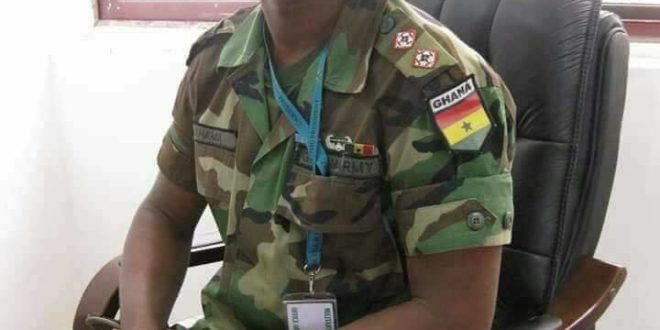 Major Mahama Trial: “I Was Throwing Stones At The Deceased In The Video” – Accused

Bernard Asamoah, alias Daddy, an accused person in the trial of the 14 alleged murderers of the late Major Maxwell Adams Mahama has told an Accra High Court that he identified himself in the amateur video.

He said he saw himself in the video shown to him by the police during interrogation, throwing stones at the late Major Mahama.

Mr. Asamoah said this during his evidence in chief to the Court in Accra on Monday.

The 14 persons are standing trial at an Accra High Court over the alleged murder of Major Mahama, who was an Officer of the 5th Infantry Battalion, at Burma Camp.

The late Major was on duty at Denkyira-Obuasi in the Central Region when on May 29, 2017, some residents allegedly mistook him for an armed robber and lynched him.

The mob had allegedly ignored his persistent plea that he was an Officer of the Ghana Armed Forces.

He said the police had asked him to assist them to identify other people in the video, but he was unable to do so to help.

Mr. Asamoah said after the interrogation, an independent witness was introduced to him, who allegedly read the content of his supposed statement in English and interpreted it into Twi Language, which they had asked him to thumbprint, which he did.

“I never agreed to the statement written for me but l was forced per their instruction to thumbprint it,” he added.

The case has been adjourned to January 23, 2023, for continuation.

I'm Adwenpa-Hene |Blogger & Broadcaster Journalist. I am the CEO and manager of this noble website. I publish on Entertainment, Sports, Politics, Lifestyle, and Technology. You can also follow Us on : YouTube Channel - My Ghana Media TV, Facebook - MyghanaMedia TV , Twitter - @MyGhanamedia2 & Instagram - My Ghana Media TV. Email Address: [email protected] Contact Us: 0200818719
@@MyGhanamedia2
Previous SLTF Opens Application Portal For Students Who Are In Need Of Money To Further Their Education
Next NCA Approves 70% Sale Of Vodafone Ghana To Telecel