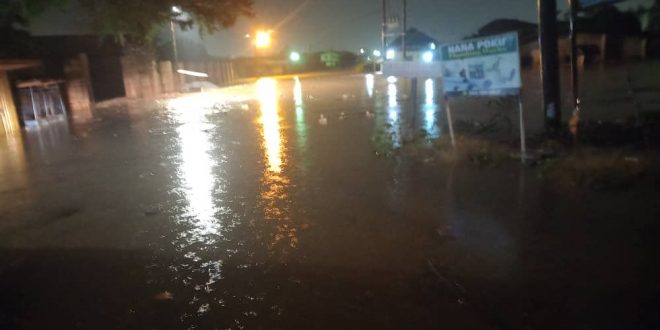 Floods are inevitable in Ghana whenever it rains. Major and principal streets in the country get taken over by water after rains.There has been series of rainfall throughout the week especially in Kumasi, which has resulted in yet another great flood in some parts of the city. 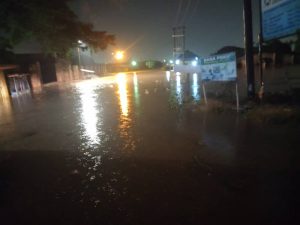 Information gathered by MyGhanaMedia.com indicates that, the rainfall which lasted for about 3 hours today, Wednesday, 23rd June, has left some parts of Kumasi, particularly , Abuakwa Manhyia DKC in the Atwima Nwabiagya Municipal of the Ashanti region and its surroundings areas in a state of mess, as it has flooded the whole area.It has been a very pathetic scene to behold, consideration the nature of the flood, which has displaced a lot of people.

Vehicles from the direction of DKC to  Atwima Abuakwa main road respectfully, could not go and also left in a mess, as the street, houses, stores etc, were all flooded. Both private and commercial drivers who were caught up in the floods had to park somewhere and run to safety.

For over four hours, people were stuck in traffic, a situation that forced some passengers to abandon their vehicle to trek to work.In video posted on social media, the road is totally covered by waters, making it impossible for cars to move, causing enormous traffic.The flood has taking over houses, cars, kiosks and stores, leaving many people displaced. 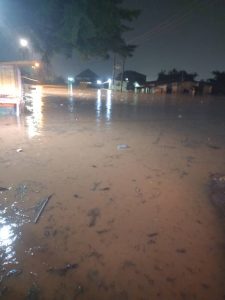 As it stands, there has not been any case of casualties, but many properties including cars, houses and other valuable things have been destroyed.

The rains, which started at about 4:30pm, lasted about an hour-and -a-half and flooded some major roads causing hundreds of cars to stuck during the morning rush hour.

Reactions  On The Nature Of The Roads By Some Residents

Some of the residents of Atwima Manhyia DKC speaking to MyGhanaMedia.com blame their Member of Parliament, Hon Emmanuel Agyei Anwhere and the Municpal Chief Executive, Mr. Micheal Amoah Awuku over the poor nature of roads.

According to them, promises by government to fix the roads are yet to materialise.

The roads, as observed, have been rendered muddy and slippery due to rainfall in the area.

According to them. ”If ballot boxes can get to this place then how come they can’t construct roads to this place? We are tired because the problem persists every time, our MP and MCE are also not forthcoming.

They stated that leaders of ruling party in the Atwima Nwabiagya South constituency do not care about the plights of people who voted them into power.

Another said:” They are not helping us they come and seek power from us, we gave them the power and they want to have everything for themselves. The same politicians are plying on this road they are using fortified vehicles, they don’t care about us.” ”When it comes to election they will bring us buckets, soap to come and take votes from us , go and ride over us for the next four years,” a resident indicated.Meanwhile some of the market man and women at Nkwawie (the capital of the municipality) were also complaining about the same issue.
We are suffering,” was the chorus sung by residents.

Some social media users who got stranded as a result of the rains took to their social media platforms to share their experiences while showing photos of the floods in their areas.