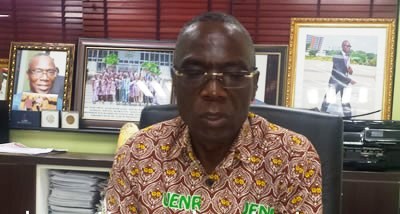 The ranking member on the Education Committee of Parliament, Peter Kwasi Nortsu-Kotoe, is calling on the President, Nana Addo Dankwa Akufo-Addo, to invite the dismissed eight students of the Chiana Senior High School (SHS) to the presidency to give them some counselling.

The Member of parliament for Akatsi North Constituency in the Volta Region on the ticket of the National Democratic Congress, Mr. Nortsu-Kotoe said this can be done after the students had finished serving their punishment.

According to him, the invitation will create room for the President to discuss extensively with the students why he didn’t allow their education to be truncated but intervened.

The Ghana Education Service (GES) in a statement on January 13, 2023, made a U-turn and referred the dismissed eight students of the school to the committee after the President intervened in the matter.

Eight students of the school were dismissed for using some unprintable words against the President in a viral video in 2022 following the hardships in the country.

But speaking on Eyewitness News with Selorm Adonoo, the ranking member on the Education Committee of Parliament opined that, “Finally, the school authorities can recommend any other punishment. There’s one other thing I would like the President to do again, that is to invite these eight students to meet with him for him to talk to them so that they will know that as a father of the nation, he intervened just because he didn’t want their education to be truncated. If this is done and students all over the country see it, they will know that tomorrow if any of them do such a thing, they will not have the opportunity to be treated like that”.

Asked if the President will not be glorifying the students’ actions, the legislator for Akatsi North Constituency in the Volta Region said, “no it depends on what the President will tell them. If a child misbehaves and the father talks to him/her on the consequences, at times they become agents of change”.