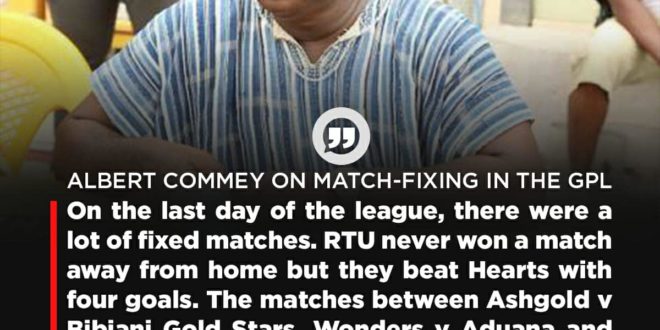 The Deputy Chief Executive Officer of AshantiGold, Albert Commey has accused his own club and others of fixing matches on the final weekend of the 2021/22 Ghana Premier League season.

Earlier this season, the Ghana Football Association (GFA) sanctioned AshantiGold and Inter Allies for a match-fixing scandal in the 2020/21 campaign to deter clubs from engaging in this further.

However, Commey claims that match-fixing continues in the league and that some matches were manipulated on the final day of the season.

“The Ghana Premier League was competitive but [I] wasn’t happy with the final day because there were lots of fixed games. RTU never won any match away. AshGold v Bibiani Gold Stars was fixed. Wonders v Aduana was fixed. King Faisal vs Legon Cities was fixed,” he told Sunyani-based Space FM.

“Normally when it gets to that time, clubs want to survive. FA doesn’t know about it. How do you think Hearts of Oak will lose by four goals? Did you watch them yesterday? We shouldn’t be hypocrites or we won’t progress. I’m a Hearts fan, I’m telling you.”

If issues like this are not resolved, the nation’s level of football will decline, he added.

“Let us not be hypocrites or else we wouldn’t move forward in Ghana football. I won’t blame the GFA on this, because teams do everything possible to stay in the league during the latter part of the league.”

The GFA and AshantiGold are expected to respond to Commey’s accusations.