The New Patriotic Patriotic Party (NPP), communication team member in the Ashanti Region had accident on Ejisu – Kumasi stretch while returning from underground campaigning with some supporters of the party unhurt.

The incident according to the victim, happened on 14th January, 2022.

According to Mr. Keskine Owusu Poku, “after radio programs to defend the party and also champion the cause of Dr. Bawumia, I went to Ejisu for another assignment for the party”.

“While driving back home from Ejisu, a tipper-truck from nowhere ran and hit the driver’s side of the car I was driving in. And it took the intervention of the public to rescue me where I was sent to hospital for treatment and was later discharged”, Keskine Owusu Poku told ARK News.

The outspoken NPP apologist is also known to be activist of Dr. Bawumia’s programmes and policies earning him ‘unofficial spokesperson for Bawumia’ 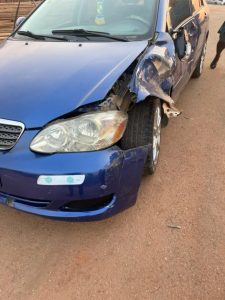 I'm Adwenpa-Hene |Blogger & Broadcaster Journalist. I am the CEO and manager of this noble website. I publish on Entertainment, Sports, Politics, Lifestyle, and Technology. You can also follow Us on : YouTube Channel - My Ghana Media TV, Facebook - MyghanaMedia TV , Twitter - @MyGhanamedia2 & Instagram - My Ghana Media TV. Email Address: [email protected] Contact Us: 0200818719
@@MyGhanamedia2
Previous All Is Set For 2nd Edition Of Floodlight Media Excellence Awards Tonight
Next Kwabena Frimpong Eulogies Hon. Abena Osei-Asare On Her Birthday