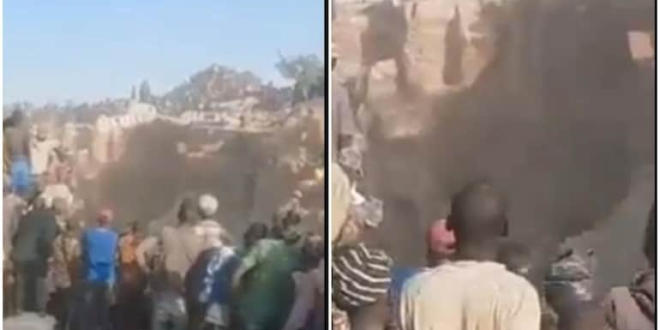 Ashanti Region: More Than 20 People Have Died In Mining Pits In 2 Years

More than twenty people have died after they either drowned or were trapped in mining pits in some areas in the Ashanti Region.

The incidents according to officials of the National Disaster Management Organization (NADMO, were recorded between 2019 and 2021 in mining areas.

NADMO is blaming the deaths on the activities of illegal miners who have left most pits uncovered after mining in these areas.

Ashanti Regional Administrator of NADMO, Nana Atakora Kodua, who disclosed this to Citi News, called on the government to expedite processes in reclaiming all lands that have been tampered with by illegal miners.

“NADMO was not part of the taskforce at the very beginning. These illegal mining operators left their pits uncovered after operations, and they have become traps for innocent people, especially children. When the rains set in, it collects water, and it becomes full, as children as they are, they will call their friends to come for a swim, and they end up drowning in them.”

“Between 2019 and 2021, NADMO could count 20 lives that have been lost due to illegal mining. Some got drowned, others died as a result of the pit collapsing on them.”

Speaking on a possible solution to ending this illegal mining act, Nana Atakora Kodua said the youth are demanding alternative jobs, else they cannot stop as it is their only means of survival.

“Speaking to the youths involved in the act, they are pleading with the government to provide them with alternative jobs so that they could abandon the risky illegal mining job.”

“The commander has been up against illegal mining and we have done about 3 operations since January, in collaboration with the Lands and Natural Resources Ministry, and the Minerals Commission providing us with logistics. It is not that the government is against small-scale mining, it is the illegality with which they are doing it.”

“We organised this program to equip our men to know what to do when they get on the field to carry out their work since most of them are now getting to do such an operation for the first time. It is not a easy work, we try our best. The places we went to stop from people engaging in illegal mining, when you go back there now, it is as if nothing happened there.”

“Let us sustain it, it would help protect our natural resources.”