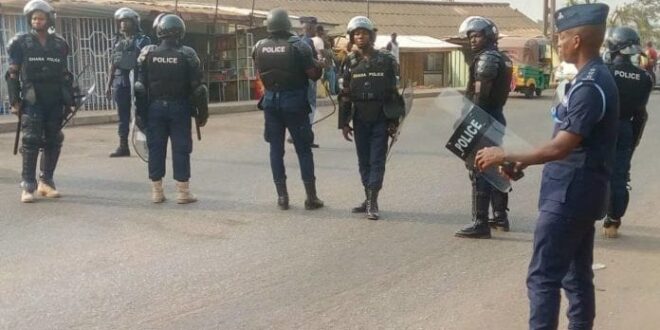 Four Assembly Members are in hot waters following their alleged involvement in rioting at Asiwa in the Ashanti Region which led to the destruction of state properties.

As a result, the Ashanti Regional Police Command has declared the four members of the Bosome Freho District Assembly wanted.

They have been advised to report with immediate effect to the regional police headquarters.
Per a statement issued by the police, the four wanted Assembly members were allegedly involved in a riot that resulted in the destruction of some properties belonging to the Bosome Freho District Assembly.

Information gathered indicates that the riots occurred on Wednesday, July 13, at an Assembly meeting to pass a ‘no confidence vote’ on the Bosome Freho District Chief Executive (DCE).

It was during the meeting that some well-built men stormed the Assembly’s hall to halt the meeting over a supposed court order.

The meeting which turned chaotic had some persons throwing plastic chairs and smashing the glass windows as well as the destruction of other state properties.