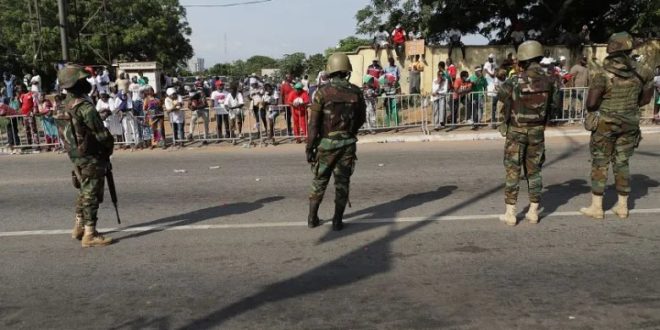 A nursing mother has been confirmed dead after soldiers reportedly fired live ammunition at mourners in the Amansie South District town of Manso/Datano in the Ashanti Region, over the weekend.

The deceased Felicia Donkor sustained gunshot wounds when the officers got to the funeral grounds of a resident said to have died after falling into a mining pit, months ago.

It is unclear what may have triggered this incident. Reports say there is tension in the area.

Speaking to Asaase News, the assemblyman for the area Kwame Amponsah called on the Ghana Army to withdraw the officers stationed in the area.

“We were having a burial service for a young man who died three months ago,” Amponsah told Asaase News. “There was a military patrol at a nearby village, upon reaching my community, they saw the people in the community jubilating and singing.”

“The soldiers started chasing them and fired ammunition which hit one lady, and she was rushed to a nearby hospital, but was subsequently transferred to Komfo Anokye Teaching Hospital and was pronounced dead yesterday.”

“My community people are calling for the withdrawal of the military personnel, and as assembly member and presiding member for the district, I am in support of that,” Amponsah said.

Listen to Kwame Amponsah in the attached audio clip below:

The military are yet to officially comment on the weekend incident.