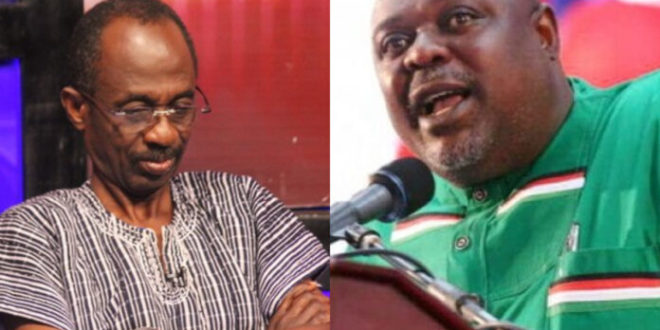 The chief executive of the Atta-Mills Institute, Samuel Koku Anyidoho, has said the general secretary of the National Democratic Congress (NDC) Johnson Asiedu Nketiah is not fit to be the national chairman and leader of the party.

Anyidoho’s comment follows a tweet he posted on Monday which read, “I saw Asiedu Nketiah jubilate when NDC led by John Mahama lost in 2016. I can’t forget the trauma I suffered seeing my general secretary rejoice because John Mahama had led the NDC to defeat.”

Anyidoho indicated that the NDC general secretary has no moral right to aspire for the top post of the party.

“I use to be his deputy for four years and I don’t think he is fit to become chairman and leader of the NDC,” Anyidoho, the former deputy general secretary of the NDC, exclusively told Asaase News.

“All I am saying is that Asiedu Nketiah does not have what it takes to be chairman and leader because Article 25 of the NDC constitution, as we are in opposition today, whoever is chairman, is also leader until we have a flagbearer,” he added.

Anyidoho has in the past accused Nketiah of orchestrating the defeat of the party in 2016.

In a series of tweets on 3 October 2022, Anyidoho revealed that the 65-year-old seasoned politician, popularly referred to as General Mosquito made sure the NDC lost the Tain constituency.

He stated in his tweets that Nketiah undermined every NDC Chairman he has worked with including the late Dr. Kwabena Adjei, Kofi Portuphy, and Samuel Ofosu Ampofo.

Anyidoho also threatened to expose Asiedu Nketia adding that “the day Asiedu Nketia becomes Chairman of the NDC, would be the burial date of the party”.

He further asked Asiedu Nketia; “Where is the land President Atta-Mills bought for the construction of the NDC school?”

Spread the love The Vice President, Dr Mahamudu Bawumia is tipped to win the New …