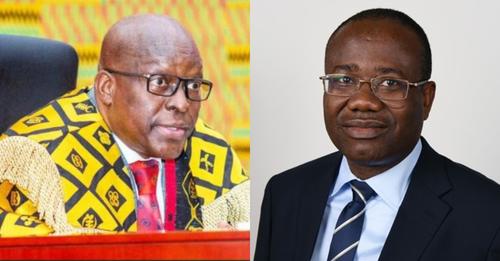 He intimated that Mr. Nyantakyi “was a dynamic addition” who contributed immensely to the success of the national team. However, his dismissal following the release of the Number 12 documentary, was the genesis of all the problems with the senior national team.

Speaking after swearing in newly elected executives of the Parliamentary Press Corps, Mr. Bagbin noted that “when we were able to bring down Kwesi Nyantakyi, we also brought down Ghana football.”

The Speaker disclosed that during a meeting with Executives of the Federation of FIFA, they questioned why that was done to Mr Nyantakyi.

“When I met the Executives of FIFA and said I was the Speaker of the Parliament of Ghana, they said what happened? Why did you people do that?

“The value that he carried at their meetings. He was highly respected, he was very influential and Ghana football was up there. We thought we were handling Nyantakyi, but we didn’t know we were handling the whole of Ghana,” he added.

He said now, “people are calling for government to forgive Nyantakyi and bring him back to assist.”

He nonetheless commended the new technical team of the Black Stars and called on all Ghanaians to throw their weight behind them.

“We were able to perform the wonders in Nigeria because of the new technical team that we put in place,” he said.

“We were able to gather potential young players of the future and they were prepared to die for Ghana.”

“If we keep this team for some time, I assure you, it’s not just the FIFA games (World Cup) we are going to play, Ghana will be up there again.”

The charges are in relation to the Anas Aremeyaw Anas Number 12 documentary which exposed alleged corruption in football in 2018.

Please listen to the audio below for more details