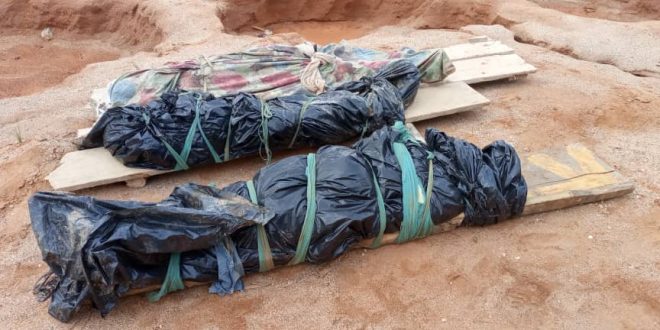 Dozens of miners are reported trapped in an illegal mining pit that collapsed on Wednesday, May 26, 2021.

The incident occurred at Denkyira Breman/Brofoyedur, a community in the Upper Denkyira West District of the Central RegionCiti News sources say at least three of the people pulled out of the wreckage are feared dead, including a victim believed to be 10 years old.

Frantic efforts are still being made to rescue those trapped.

It is believed that the victims are not residents of the community as none of the residents could identify any of the deceased.

This comes at a time when the government has renewed the fight against all forms of illegal small-scale mining by burning excavators and other mining equipment in forest reserves and on water bodies.

He indicated that his outfit is yet to secure excavators to start the evacuation process.

“Some people went for illegal mining last night and according to them, those confirmed dead are three. We are yet to excavate the ground to see the number of victims in the pit. The confirmed report is that they are between 30 and 40 people, but because it happened at dawn, we are yet to get the excavators to go there,” Isaac Gyasi said.

This is not the first time a mining pit had caved on miners in Ghana.

In November 2020, an illegal small-scale mining pit in the outskirts of Ayanfuri in the Central Region collapsed and trapped eight persons between the ages of 24 and 35 years.

The illegal miners were rescued by residents and rushed to the Dunkwa on Offin Government Hospital where they were pronounced dead on arrival.

A similar situation was recorded in October 2020, where five persons died when they were trapped in a mining pit at Ayamfuri in the Upper Denkyira West District of the Central region.

15 others who were also trapped in the cave sustained varied injuries after the incident.

One person died recently after an underground mining pit which is part of the concession of Anglogold Ashanti Obuasi Mine, caved in and trapped some workers.

The incident reportedly occurred on Monday, May 17, 2021.

According to the mining workers who spoke to Citi News on condition of anonymity, four persons working for Underground Mining Alliance, UMA, a company contracted by Anglogold Ashanti Obuasi mine, were trapped underground.

I'm Adwenpa-Hene |Blogger & Broadcaster Journalist. I am the CEO and manager of this noble website. I publish on Entertainment, Sports, Politics, Lifestyle, and Technology. You can also follow Us on : YouTube Channel - My Ghana Media TV, Facebook - MyghanaMedia TV , Twitter - @MyGhanamedia2 & Instagram - My Ghana Media TV. Email Address: [email protected] Contact Us: 0200818719
@@MyGhanamedia2
Previous NPP Has No Better Candidate To Compete Mahama In 2024 Election – Papa Jay Writes
Next Go To Court – Akufo-Addo Tells Persons Against Burning Of Excavators In Galamsey Fight