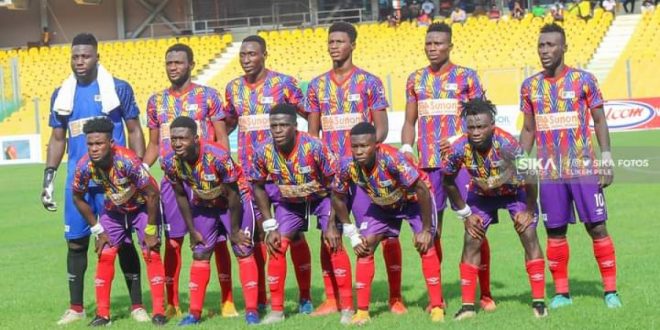 Hearts of Oak coach Samuel Boadu has named a 23-man squad for the game against JS Saoura of Algeria in the second leg of the CAF Confederation Cup play-offs.

The Ghana Premier League champions go into the second leg with a 2-0 lead in the first leg.

Goals from Salifu Ibrahim and Agyenim Boateng ensured the Phobians have that advantage ahead of the return leg on Sunday.

The Phobians have been handed a massive boost with the return of Salisu Ibrahim who has been declared fit to travel with the squad for the game.

Hearts of Oak will depart to Algeria on Wednesday and are expected to arrive in the country on Friday for the game.

Below is the traveling squad

I'm Adwenpa-Hene |Blogger & Broadcaster Journalist. I am the CEO and manager of this noble website. I publish on Entertainment, Sports, Politics, Lifestyle, and Technology. You can also follow Us on : YouTube Channel - My Ghana Media TV, Facebook - MyghanaMedia TV , Twitter - @MyGhanamedia2 & Instagram - My Ghana Media TV. Email Address: [email protected] Contact Us: 0200818719
@@MyGhanamedia2
Previous Accra Mayor To Ghanaians: Demand Food Handler’s Certificate From Food Vendors Before Buying From Them
Next Akuapem Poloo Loses Appeal, Goes Back To Prison To Finish Her 90-Day Jail Term