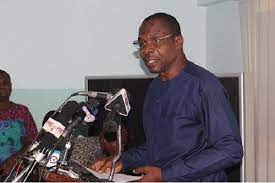 The President of the Ghana Journalist Association Affail Monney has expressed regret over his initial comments on the arrest of Citi FM’s Caleb Kudah by officials of the National Security.

Mr Monney had said the journalist breached the code of ethics of the profession when he entered the premises of the state security agency and filmed abandoned state-purchased vehicles.

The comment has attracted condemnation from some journalists and civil society groups with ASEPA calling for his removal.

Addressing a news conference in Accra, Mr Monney said he had little information on the incident when he granted the interview to Joy FM.

“As I indicated, the information I had before the interview was scanty. What is available now is sufficient, as legal luminaries, distinguished ethicists and social critics slice and dice the issue from all angles. It is healthy for a free society such as ours for viewpoint diversity to be manifestly venerated, not maliciously castigated.

“I, therefore, render my sincerest apology for any misimpression created that I was insensitive to the plight of the journalists but excited about the excesses by the National Security operatives. Indeed, those excesses pass for wickedness at its most naked nastiness. And I totally denounce them.

“Under my presidency, attacks or threats against journalists ,irrespective of the perpetrators or victims , have received outright condemnation. So there is no way the latest ones against the Citi FM journalists will be swept under the carpet. Not at all. Indeed, the ordeal as narrated by the journalists is heart-rending, soul-wrenching, mind-boggling, and earth-shattering,” he said.

See also  Rambo: I Made Alan Kyeramaten Lose The Flagbearer Election Against Akufo-Addo

Meanwhile, the ministry of national security says investigations have commenced into the alleged manhandling of the Citi FM reporters.

“The Ministry of National Security has taken note of claims by Mr. Caleb Kudah and Ms. Zoe Abu Baidoo, journalists from Citi FM, that they were manhandled during an interrogation at the Ministry on May 11, 2021.

“The protection of the rights and freedoms of the citizenry remains a cornerstone to safeguarding the peace and stability of the State. Cognizant of the aforementioned, the Ministry of National Security, strives, at all times, to uphold the ethico and professional standards guiding operational duties. This includes but not limited to interrogation processes for persons who are required to assist in Investigations. The Ministry, therefore, takes with all seriousness, the allegations of manhandling of the two journalists during the interrogation. The Ministry has therefore initiated investigations into the said allegations.”