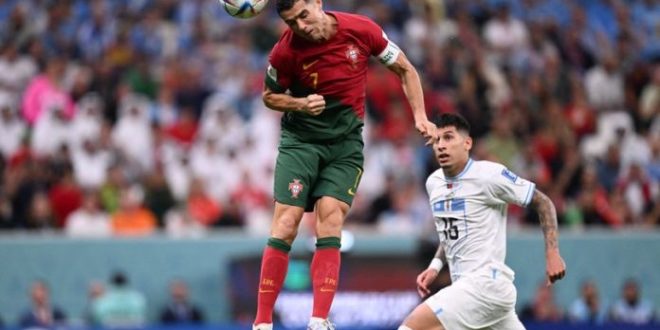 A statement from FIFA and Adidas has confirmed that former Manchester United forward Cristiano Ronaldo did not get a touch on Bruno Fernandes’ cross after using technology from within the match ball.

Portugal beat Uruguay 2-0 on Monday as they became the third country to book their place in the round of 16, following in the footsteps of France and Brazil.

For Portugal’s first goal, Fernandes curled in a cross that saw Ronaldo leap high into the air and appear to glance a header into the bottom corner. The 37-year-old wheeled away in delight, claiming the goal as his own, yet replays showed that the former United man did not make contact with the ball.

And now, a statement provided from FIFA on behalf of adidas, has confirmed that Ronaldo’s head did not make contact with the ball, with the goal officially being awarded to Fernandes instead.

The statement read: “In the match between Portugal and Uruguay, using the Connected Ball Technology housed in adidas’s Al Rihla Official Match Ball, we are able to definitively show no contact on the ball from Cristiano Ronaldo for the opening goal in the game.

“No external force on the ball could be measured as shown by the lack of ‘heartbeat’ in our measurements. The 500Hz IMU sensor inside the ball allows us to be highly accurate in our analysis.”

The goal would have taken Ronaldo level with legendary striker Eusebio on nine World Cup goals for Portugal. Yet the 37-year-old will now have to wait until his nation’s clash against South Korea on December 2 for another chance to score.

Ronaldo was not the only Portugal player who thought he had scored, as Fernandes revealed after the match that even he thought his former teammate had got on the end of his cross.

"Technology inside the ball definitively shows there was no touch"

Adidas' explanation as to why Cristiano Ronaldo was not awarded Portugal's first goal against Uruguay 👇 pic.twitter.com/go2JpAn0Uv

He said: “I celebrated as if it had been Cristiano’s goal. It seemed to me that he had touched the ball. My aim was to cross the ball for him. We are happy with the victory regardless of who scored. The most important thing is that we achieved our aim which is to be in the next round.”