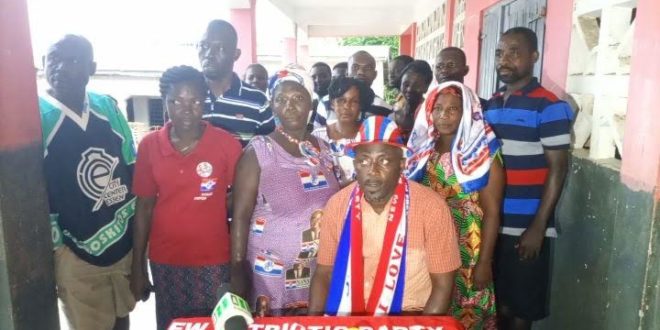 The New Patriotic Party (NPP) concerned party faithfuls in the Akyem Achiase constituency of Eastern region numbering about hundred and fifty (150) people have threatened to defect to NDC if leaders at the national executives refuse to attend to their problem.

Speaking as the leader of the “concerned NPP faithfuls at Achiase constituency” in a press conference held at Akyem Achiase; Mr. John Bamfo Amoah popularly called “JB” revealed that some people who wanted to contest for position in the party have been disqualified because they’ve been accused of supporting the former MP during the 2020 election.

He added that all those disqualified aspirants joined the 2020 election campaign even though their preferred candidates lost but they worked to win power for the incumbent member of parliament hence they do not agree with the party executives for disqualifying them.

He further added by cautioning the party executives at the national level led by the party’s General Secretary Mr. John Boadu to as a matter of agency come to Akyem Achiase constituency to help pave way for peace else they will make everything possible to halt the election until every person in the party is given equal treatment.

Some of the concerned NPP party faithfuls present at the press conference who also have been disqualified spoke to the media and shared their displeasure of being disqualified by the party executives.