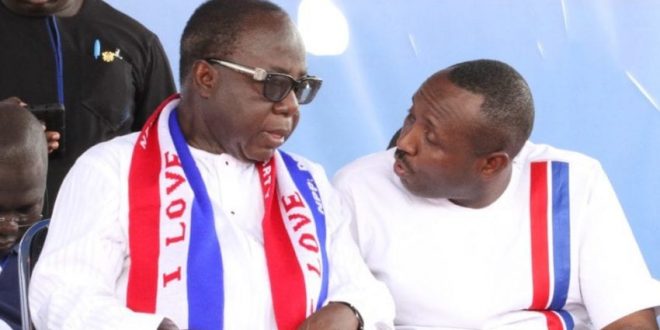 The New Patriotic Party (NPP) has said the government cannot be blamed for the large public gathering at the funeral of the late CEO of the Forestry Commission, Kwadwo Owusu Afriyie, popularly known as Sir John.

Speaking in an exclusive interview with Asaase Radio’s Beatrice Adu on The Big Bulletin, Freddie Blay, the national chairman of the NPP, said the main organiser of the funeral was Sir John’s family, adding the NPP and government were just invited.

However, he admitted the size of the gathering was “unfortunate” although measures were put in place to observe COVID-19 protocols.

The pressure group, OccupyGhana and the Ghana Medical Association (GMA), have both condemned the governing NPP for disregarding COVID protocols at the funeral despite the huge numbers of mourners.

“The GMA condemns such activities that violate our protocols and has the tendency to reverse all gains made in our fight against COVID-19.

“We call on the law enforcement agencies to investigate and deal with the organisers of this and any similar events to serve as a deterrent to others who intend to endanger the public health of our nation. We call on the Inspector General of Police to act without fear or favour in this regard,” the medical association said in a statement.

Reacting to the condemnation, Blay said: “The arrangement was such that most of the people were going to be in mask. Be it as it may, the gathering was something else… I take into consideration the expression of the GMA and OccupyGhana.”

“However, it was the family that organised the funeral and we were invited. It was not a funeral that was officially organised by the government or the party. It’s unfortunate that most of the people were NPP activists. It wasn’t a government or party event. We were not expecting the numbers that were there.

“If you want to condemn the government because many officials were there then I think you’re wrong… The numbers were huge and I think it’s quite regrettable irrespective of the protocols that were put in place,” Blay said.

Touching on calls on the Inspector General of Police for the arrest and prosecution of the organisers of the funeral, Blay indicated that, all aggrieved groups are entitled to report the case to the relevant authorities.

“I wouldn’t respond to that, that is their opinion and if they are calling on the IGP to arrest the organizers, the law makes provision for that,” he said.