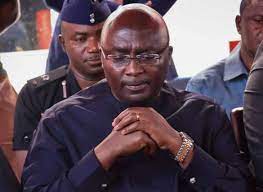 Dr. Bawumia Mourns After Being Hit With Sad News

Hajia Mariama Bawumia (alias Maame), the mom of Ghana’s Vice-President Dr Mahamudu Bawumia has died in the capital, Accra on Monday 13 September 2021.
She had been hospitalised in a medical facility in Accra over the past few weeks.
A native of Kpasenkpe in the West Mamprusi District, Hajia Mariama was one of the first northern female students to gain admission to the prestigious Wesley Girls High School in Cape Coast in the Central Region.
During her 80th birthday in 2019, Dr Bawumia in a Facebook post described her as “the pillar of my life.”
“I always thank the Almighty God for giving me such a caring and supportive mother. She has always been there for us. The pillar,” he said in the post.

Accra based Asaase radio on their  Facebook page  announced  the news of  the vice president  mother’s  demise.

Read his post below:
Vice President H.E Alhaji Dr. Mahamudu Bawumia has this morning lost his mum. She had been unwell and hospitalized over the past few weeks. May Allah admit her to Jannah
Inalillahi wa ina ilaihi raji’un

Hajia Mariama Bawumia, widow of the statesman Mumuni Bawumia and mother of the serving vice-president, Alhaji Mahamudu Bawumia @MBawumia, passed away in the early hours of this morning, 13 September 2021.
Hajia Bawumia Snr was unwell and had been receiving care in hospital for the past few weeks.
Inalillahi wa ina ilaihi raji’un. May Allah admit her to Jannah.
#AsaaseRadio
#TheVoiceofOurLand
#WeLoveOurLand
Source: MyGhanaMedia.com