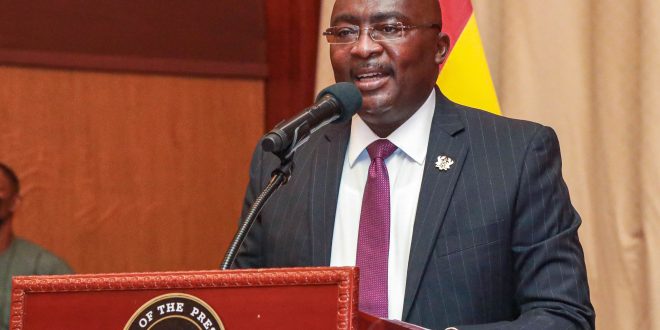 Vice President  Dr. Mahamudu Bawumia has topped Twitter trends after the Minister of Finance presented the 2022 budget before Parliament on Wednesday, November 17, 2021.

While some Social Media users on Twitter are questioning the introduction of E-levy, others have called out Dr. Bawumia on his comments against the taxation of Mobile Money after the minister announced a 1.75 percent tax on Mobile Money.

This statement was made in an exclusive interview with Kwame Sefa Kayi on Peace FM.

It is, therefore, the surprising government announced a 1.75 percent tax on Mobile Money in the 2022 budget read yesterday.

Below are some of the tweets:

“I’m wondering if Dr Bawumia was aware of this move before he delivered his digitalization lecture. Because it seems to undercut his message somewhat. I’m afraid old boy may be becoming a scapegoat for this administration.” ReadJerome shared on Twitter.

@af_ia_blue tweeted, “Bawumia paaaa. Digitalization but tax on electronic transactions. So how do these politicians think? I don’t get it. We have the men mpo ni?”

“Nana Addo & Bawumia have failed Ghanaians big time. This is not what we voted for,” @efo_phil noted.