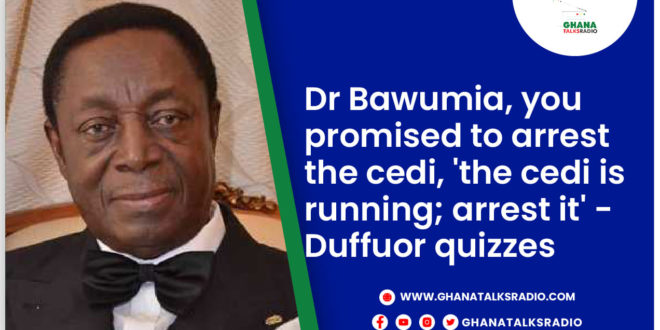 Dr. Duffuor To Dr. Bawumia: You Cannot Match My Record

The former Minister for Finance Dr Kwabena Duffuor has said the current managers of the economy cannot match what he was able to achieve in the late John Atta Mills government.

“We made it possible and we will do it again because we know how to do it,” the presidential hopeful of the NDC said at the launch of his grassroots party empowerment and self-financing project dubbed the “Ahot)” Project in Ashaiman in the Greater Accra Region.

“I hear some people are talking somewhere on the economy…, whatever they do or say what we achieved under Professor Mills they cannot do it because they just don’t know how to do it. For almost two years Ghana was adjudged the best managed economy globally under professor Mills,” Duffuor said.

Meanwhile, Bawumia, has said he is highly optimistic that Ghana’s economy will rebound faster than expected as a result of the smart policies the government has rolled out to bolster the economy.

“With sound policies to enhance growth, fiscal and monetary discipline and by the Grace of God, we are bouncing back better and stronger,” Dr Bawumia said at the national TESCON conference on Thursday (7 April) in Kasoa.

“Our government has achieved a lot and as a country we have come a long way,” the vice-president said.

Bawumia, however, urged Ghanaians to appreciate the government’s accomplishments, big and small, rather than trying to tarnish or diminish them for political purposes.