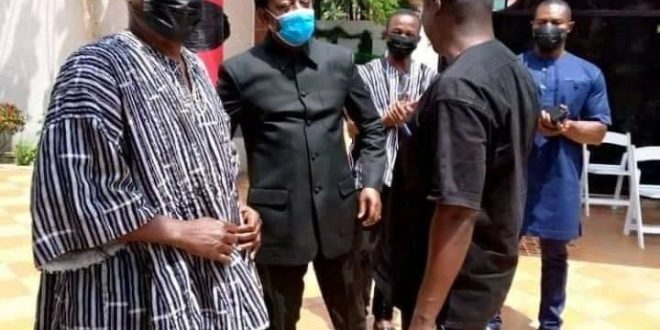 Member of the former Minister of Finance, Dr. Kwabena Duffuor’s Campaign Team, Yaw Boateng Gyan is spilling the beans about the cancellation of the Duffuor’s Ahotor Project relaunch at the Headquarters of the opposition National Democratic Congress (NDC) in Accra last Tuesday.

According to the former National Organizer of the NDC, the National Chairman of the party, Samuel Ofosu Ampofo called off the project launch at the party’s Headquarters.

He explained that all was set for the event at the Headquarters when the National Chairman through the National Communications Officer Sammy Gyamfi called to inform him that the relaunch has been put on hold.

In a statement, Yaw Boateng Gyan said “In the morning of Monday June 6, 2022, while preparing for the relaunch on Tuesday, Sammy Gyamfi called me and delivered a message from the National Chairman, Hon. Ofosu Ampofo that the relaunch of the Ahoto has been put on hold.

“This was the last communication regarding the relaunch of the Ahotor Project with FEC.”

On the next line of action, the former NDC Organiser mentioned that “We are still waiting for FEC official communication regarding the relaunch of Ahotor Project.”

Read the full statement from the Dr Duffuor Team below:

Our attention has been drawn to a publication with the above heading purporting to be coming from the general secretary of the National Democratic Congress Johnson Asiedu Nketiah dated June 9 but issued on June 8 2022, relating to the relaunch of the Ahotor Project.

We wish to explain as follows:

On Wednesday June 1 2022, Dr. Kwabena Duffuor and I, Yaw Boateng Gyan Former National Organiser of the NDC, met with the NDC Functional Executive Committee (FEC) and presented a draft agreement on the implementation of the Ahotor Project for the NDC Grassroots, for the consideration of FEC. FEC deferred the draft agreement to the two lawyers, Hon. Alex Segbefia and Sammy Gyamfi for their study. At this same meeting, FEC proposed, and we all agreed to relaunch the Ahotor project at the headquarters on Tuesday June 7 at One11 am.

After the agreement to relaunch the Ahotor Project on Tuesday June 7, we thanked the members of FEC and left the meeting on Wednesday June 1 2022. On the evening of Thursday June 2 2022, Lawyer Sammy Gyamfi, the national communications officer presented an edited version of the draft agreement to us for or consideration.

On this same Thursday evening we also presented additional edits to the national communications officer, Lawyer Sammy Gyamfi for their consideration. We did not hear from FEC throughout the weekend, so focused on the preparations for the relaunch on Tuesday June 7, 2022.

We wish to assure the NDC membership that our resolve to equip the base with the necessary tools for financial independence is still as strong as ever.

I'm Adwenpa-Hene |Blogger & Broadcaster Journalist. I am the CEO and manager of this noble website. I publish on Entertainment, Sports, Politics, Lifestyle, and Technology. You can also follow Us on : YouTube Channel - My Ghana Media TV, Facebook - MyghanaMedia TV , Twitter - @MyGhanamedia2 & Instagram - My Ghana Media TV. Email Address: [email protected] Contact Us: 0200818719
@@MyGhanamedia2
Previous PMF Petition Akufo-Addo To sack Sheikh Quaye For Gross Misconduct
Next You Can Get Monkeypox Through Hugging, Sex And Kissing – NHIA Boss