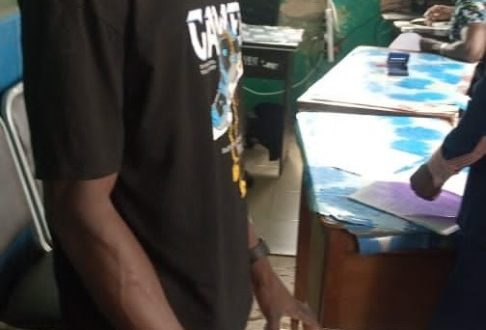 Oheneba Emmanuel Kwaku, a 26-year-old man, has been sentenced into prison custody for a year.

Emmanuel Kwaku Oheneba was charged for presenting himself as a staff of the National Identification Authority (NIA) and issuing fake Ghana Cards to unsuspecting victims at Obretema in the Suhum municipality of the Eastern Region for a fee.

Oheneba charged his victims between ₵30.00 and ₵50.00 for each fake card issued.

The Suhum Circuit Court Presided over by Her Honour Efua Eddison subsequently convicted and sentenced Oheneba Emmanuel Kwaku into prison custody on his own plea.

“I reported to the Police and led the Police team to the scene. When we went there, we realised that the gentleman was standing there with tables in front of him under a tree registering victims. His modus operandi was that he collects ₵25 to ₵30 from everyone who came to register,” Mr. Odame narrated .

He called on Ghanaians to make use of the District Offices located in the district capitals across the country.

“In every district, there is an NIA office there. If you need any of our services go to the NIA office there and you will be served…NIA has not sent any individual to any community or whatsoever to write down people’s name and take money from them. Alert the Police when you get anybody like that,” Mr. Ofori said.