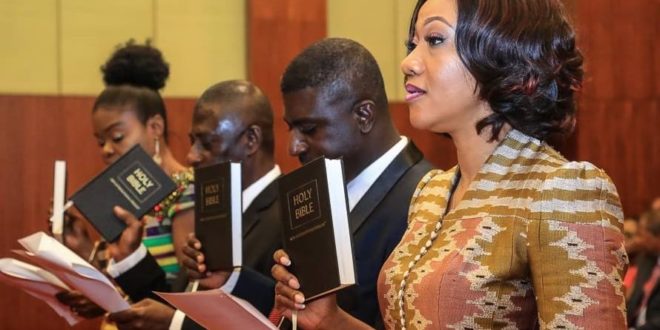 The Chair of the Electoral Commission, Ghana (EC), Jean Adukwei Mensa, and her two deputies, Dr Bossman Eric Asare and Samuel Tettey, have filed a suit at the Supreme Court against Oliver Barker-Vormawor, the Chief Justice and the Attorney General for the leakage of the petition seeking their removal in the media.

According to the EC commissioners, a true and proper interpretation of Article 146(8) of the 1992 Constitution demands that the content of a petition seeking the removal of a public officer must not be published in the media.

However, they contend, that is what happened in the case with the petition sent to the President by Mr Barker-Vormawor, who is also the Convenor of #FixTheCountry, to get them removed from office.

Therefore, the EC Chair and her deputies are seeking reliefs, one of which is an order of “perpetual injunction” placed on the Chief Justice, Kwesi Anin Yeboah, from “determining, dealing, or having anything to do in any manner whatsoever and/or howsoever, with any issues arising out of the contents of Petitioners Petition or at all”.

The petition was brought on Monday, January 10 in connection with the intentional denial of the right to vote of the people of Santrokofi, Akpafu, Lololi and Likpe (SALL) in the 2020 general parliamentary elections.

The petitioners asserted that the actions of the impugned officials, if considered in context and in light of their preceding and subsequent conduct, meets the threshold of stated misbehaviour and, or incompetence as required under Article 146 of the 1992 Constitution for their removal.

A week later, the lead petitioner – in a communication to the media – said the Presidency had responded to the petition and forwarded it to the Chief Justice.

They were even given the opportunity by the Chief Justice to provide missing pages.

But the EC and her deputies says the action by the petitions constitutes a “sin” against the dictates of Article 146.