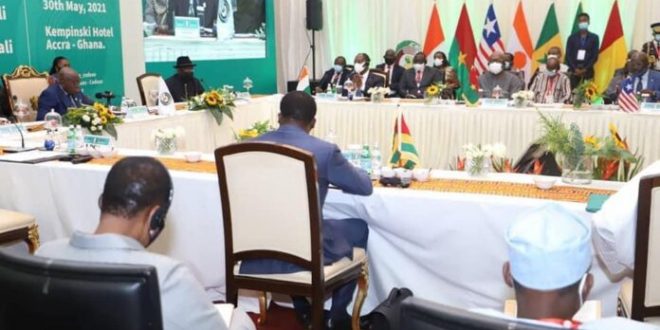 Heads of State of the Economic Community of West African States (ECOWAS) have suspended the Republic of Mali from the regional body, ordering the military leaders who are currently in charge of the nation to restore the transitional arrangement put in place in August 2020 with the aim of returning the troubled West African state to democratic rule by 27th February 2022.

ECOWAS heads of state took this decision today the 30th of May 2021 after over five hours of deliberations at an extraordinary summit on the Malian situation at the Kempinski Hotel in Accra.

Addressing the press after the summit, Ghana’s Minister for Foreign Affairs and Regional Integration, Shirley Ayorkor Botchwey, said the heads of state expect the Malian Military junta to work closely with the ECOWAS Secretariat forthwith to ensure that the existing transitional arrangement is restored by first appointing a civil leader to lead the process.

“The decision of the heads of state is to go according to the protocol on democracy and good governance to suspend Mali from ECOWAS but at the same time, work with ECOWAS to ensure that the transition is on track towards the end goal which is to return the people of Mali to democratic rule” Shirley Ayorkor Botchwey said.

According to a ten (10) paragraph communique issued by ECOWAS at the end of the summit, the ECOWAS heads of state “strongly condemn this recent Coup d’Etat, which is a violation of the decisions taken at the extraordinary Summit held at the Peduase Lodge, Aburi, Ghana on 15th September 2020 and a violation of the Transition Charter”.

The communique further stated that “after extensive discussions on the situation in Mali, the Heads of State and Government decided “to reaffirm the importance and necessity of respecting the democratic process for ascending to power, in conformity with the 2001 ECOWAS Protocol on Democracy and Good Governance. They particularly condemn all actions that led to ongoing instability in Mali, and its attendant consequences in the region”.

ECOWAS “call for a new civilian Prime Minister to be nominated immediately, a new inclusive government should be formed to proceed with the transition programme, reaffirm the need to respect the transition period of 18 months decided in Accra. In this context, the date of 27th February 2022 already announced for the Presidential election should be absolutely maintained. A monitoring Mechanism will be put in place to this effect”.

The communique again, reiterated “the earlier decisions that the Head of the transition, the Vice-President and the Prime Minister of the transition should not, under any circumstances, be candidates for the forthcoming Presidential election and reaffirmed” ECOWAS’ support to accompany the transition process in Mali”.

I'm Adwenpa-Hene |Blogger & Broadcaster Journalist. I am the CEO and manager of this noble website. I publish on Entertainment, Sports, Politics, Lifestyle, and Technology. You can also follow Us on : YouTube Channel - My Ghana Media TV, Facebook - MyghanaMedia TV , Twitter - @MyGhanamedia2 & Instagram - My Ghana Media TV. Email Address: [email protected] Contact Us: 0200818719
@@MyGhanamedia2
Previous Here Is How The Cedi Is Performing Against Foreign Currencies As Of May 28
Next Akufo-Addo To Launch Coach Buses For Domestic Tourism Tuesday