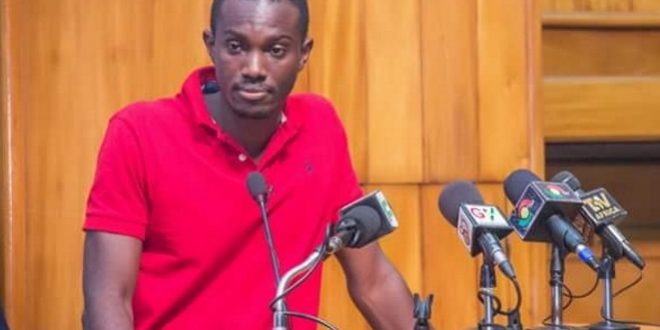 EFL Is No Longer Part Of #FixTheCountry Conveners – Ernesto Yeboah

The Economic Fighters League (EFL) has announced its decision to quit the FixTheCountry Movement.

According to the group, the FixTheCountry Movement which began as a “brilliant, viral social media hashtag which simply captured exactly the demands of the Ghanaian youth disenchanted with the political governance system” has been encroached upon by persons with parochial interests.

“Sadly, the FixTheCountry conveners’ platform no longer offers a conducive environment for honest and credible mobilization. The selfish interest of some appears to be driving the movement to what we feared the most, namely, that the hard work of the numerous activists will be cultivated to the benefit of certain partisan political forces or interests.

“Our independent thought is gradually being replaced with remotely controlled thinking and accountability levels are falling worryingly. The people’s movement is being lost, and we have a duty to safeguard it,” the group said at a press briefing held earlier today.

See also  Barker-Vormawor’s Arrest: "I Will Be Interested To See Where This Goes’ – British High Commissioner

The group stated that considering how much they have invested into seeing to the fruition of Ghana’s largest youth-led protest since the 4th Republic, it would be detrimental to their values and the purpose of the FixTheCountry protest to continue to serve as conveners for the movement.

The EFL members , however, stated that they will continue to fight for the essence of the FixTheCountry message.

“Like so many of our fellow conveners, we have put everything into this and I mean everything, and so cannot and will not be complicit in actions that will compromise the people’s revolution. We are adamant that the efforts to liberate Ghana from the stranglehold of the false republic remains centered on the Ghanaian people and the fight for economic democracy.

“FixTheCountry is a call to duty which we at Fighters, affirm is in consonance with our objective of economic democracy for the people in their life time. It is a rallying cry, born out of the popular discontent of the masses. It is a message we believe in and shall continue to project because it falls within our nationalist patriotic objective,” the group stated.

Meanwhile, they have reiterated their plans of making their parliamentary debut in the upcoming 2024 General Elections.

According to members of the Economic Fighters League, they will “facilitate the building of an alliance or coalition with individuals and or organisations with the shared objective of reclamation of power for the people of Ghana.”

“In this regard, we are ready to field FixTheCountry parliamentary candidates to hold the fort in Parliament as we carry on with our fight in the streets to restore the hope and dignity of our people,” they stated.