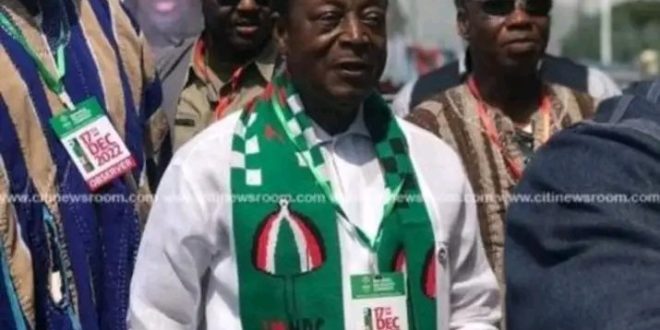 Enough Is Enough! – Friends Of Dr. Duffuor In Eastern Region Tells Okudzeto Ablakwa And Others

The Member of Parliament (MP) for North Tongu Constituency in the Volta Region, Mr Samuel Okudzeto Ablakwa, has incurred the wrath of some right thinking members and supporters of the National Democratic Congress (NDC) who are calling itself the Eastern Regional branch of Friends of Dr. Kwabena Duffour, the potential presidential hopeful of the NDC.

The group could not fathom why the former Deputy Minister of Education in-charge of Tertiary Education would go on air to predict a landslide victory for former President John Mahama in his bid to be reelected as the NDC’s 2024 flagbearer without recourse to the 1992 constitution of the NDC.

The group described Mr. Okudzeto Ablakwa’s current decision to predict 95% victory for Mr Dramani as a divisive and issued a stern warning to Mr Okudzeto-Ablakwa and those individual elements within the NDC who are saying that the former President Dramani Mahama should be allowed to contest NDC’s 2024 flagbearer race unopposed to stop going on air to attack or assainate the character of those who are contesting the NDC’s 2024 flagbearer position with Mr. Mahama.

These current decisions of Mr Okudzeto-Ablakwa and others elements of the NDC, they noted has created confusion and division within the NDC saying that it is a high for them to stop that habits which, according to them, is threatening democratic dispensation of the NDC which is known to be a social democrat political party.

They asked Mr Okudzeto Ablakwa whether he has been be allowed to contest his parliamentary primaries unopposed in his North Tongu constituency before he is publicly campaigning for Mr Mahama to contest the upcoming NDC’s flagbearer-ship race unopposed.

“It is a loose and childish talk for the North Tongu legislator to be campaigning on the air for former President Dramani Mahama to contest the presidential position of the NDC alone because there are structures and foundations of the party.

“We want to tell Okudzeto Ablakwa and other top elements within the NDC who are using the, print, television and radio platforms to be attacking and insulting those who are contesting the NDC’s flagbearer-ship race with former President Dramani Mahama for the should to stop their continuous habits. We want to tell Okudzeto Ablakwa and these individuals that enough is enough. This is the time for us in the NDC to think and move NDC forward to win the 2024 general elections,” the Duffuor-s supporters stressed.

They stated that the current economic crisis which has rocked the nation has started from the regime of the former President Dramani Mahama but the current President Nana Addo Dankwa Akufo-Addo has came to worsening the economic situation which brought hardships to many Ghananias in the country.

They indicated that the late Prof. John Evans Fifii Atta-Mills administration has improved the Ghana’s economic status because of the numerous good economic and advises offered to him by the former Minister of Finance and Economic, Dr. Kwabrna Duffuor.

According to them, under the late President Prof Evans Fifii Atta-Mills administration, the country’s economic prospects have improved by 40 percent saying that the inflation rate for the nine mouths (9) is almost below the single digit.

They argued that Mahama’s appeal has dwindled amongst Ghanaians due to the many scandals that rocked his government between 2012 and 2016 when he was voted out of power.

They therefore want a new face like the former Governor of Bank of Ghana (BoG) to shoulder the responsibility of the party’s flagbearership going into the 2024 general election.

They stressed that it is a high time for the delegates and members of the NDC to vote massively for Dr Duffuor to win the NDC’s presidential position election saying that Dr Duffuor has demonstrated that he has what it takes and technical know how to lead the NDC to victory in the 2024 showdown.

See also  We Were Elected To Solve Problems; Gov’t Has Tackled A Number Of Them – Dr. Bawumia

The group on Monday January 2, 2022 was responding to some comments made by the North Tongu MP on air when he sought to downplay Former Minister and Economic Planning, Dr Kwabena s earlier declaration to the contest the NDC’s 2024 flagbearer position when the nomination open.

According to Mr Okudzeto Ablakwa, the former President will carry the day by an estimated 95% of the total valid votes cast.

I'm Adwenpa-Hene |Blogger & Broadcaster Journalist. I am the CEO and manager of this noble website. I publish on Entertainment, Sports, Politics, Lifestyle, and Technology. You can also follow Us on : YouTube Channel - My Ghana Media TV, Facebook - MyghanaMedia TV , Twitter - @MyGhanamedia2 & Instagram - My Ghana Media TV. Email Address: [email protected] Contact Us: 0200818719
@@MyGhanamedia2
Previous Ashanti NPP Openly Roots For Dr. Bawumia’s Presidential Bid
Next Myself And The NPP Are Grateful For Your Support  – Sir John To Atwima Nwabiagya South Folks