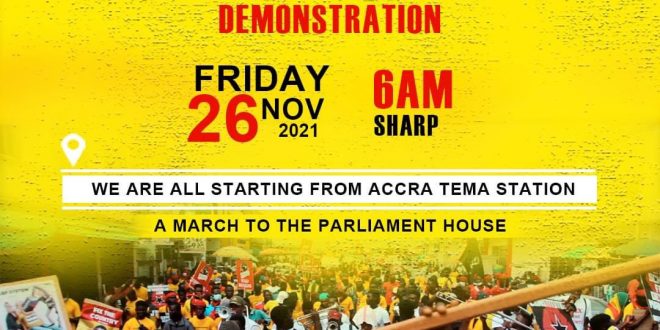 #FixTheCountry Movement To Embark On ‘Yentua Demo’ Over E-levy, Other Taxes In 2022 Budget

Members of the #FixTheCountry movement will today, Friday, November 26, 2021, hit the streets of Accra to demonstrate against some of the policies announced in the 2022 budget.

The Finance Minister in reading the budget announced the introduction of a 1.75% tax on all electronic transactions.

The Finance Minister also indicated that a 15% increase in government services.

However, the group is displeased about the moves by the government and wants those proposals rejected by Parliament.

One of the conveners of the movement, Benjamin Darko in an interview ahead of the demonstration said the group will present a petition to Parliament.

He explained that the Executive can only propose but it is Parliament that has the power to accept those proposals and impose them on Ghanaians.

“That is why our constitution says Parliament has the power to impose taxes and levies and it is not the power of the Executive to establish the power of imposition.”

Meanwhile, the police in a press statement issued last night said it has put in place adequate preparations for the demonstration.

“The Accra Regional Command has made adequate arrangements for the #FixTheCountry demonstration slated for Friday, 26th November 2021,” the police said in the press statement.

The movement in August this year organized a massive demonstration to drum home concerns about the state of the economy after several failed attempts to protest.

See also  Asenso-Boakye: ‘I Was Hoping Keta Sea Defence Project Would Be Captured In 2022 Budget’

I'm Adwenpa-Hene |Blogger & Broadcaster Journalist. I am the CEO and manager of this noble website. I publish on Entertainment, Sports, Politics, Lifestyle, and Technology. You can also follow Us on : YouTube Channel - My Ghana Media TV, Facebook - MyghanaMedia TV , Twitter - @MyGhanamedia2 & Instagram - My Ghana Media TV. Email Address: [email protected] Contact Us: 0200818719
@@MyGhanamedia2
Previous Government Considering Removal Of E-Levy On Inward Remittances
Next Why Didn’t The Speaker Go To Collect The Road Tolls Himself? – John Boadu Quizzes