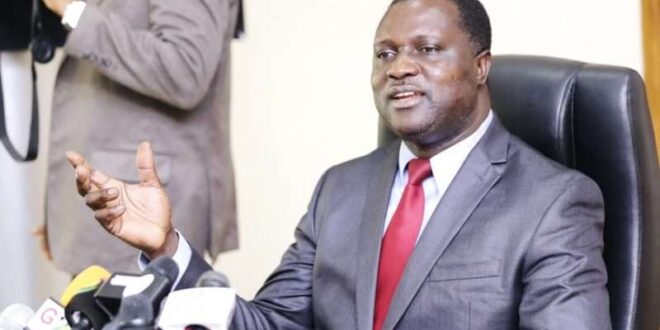 The Minister of Education, Dr. Yaw Osei Adutwum has made a passionate appeal to the media not to do the bidden of faceless individuals seeking his downfall at the Ministry.

These people, he said, who are also New Patriotic Party (NPP) members are only pursuing a smear campaign against him for their own parochial, interest.

According to the Member of Parliament for Bosomtwe Constituency in the Ashanti Region, he was earning more money in the United States before he responded to President Nana Akufo-Addo’s call to come to Ghana.

“But I left it to come to Ghana”

See also  Prof Bokpin To Akufo-Addo: Resign If You Cannot Manage The Country With 40 Ministers

“I will not bring shame to Ghana, I will bring honour to this great nation or ours because I believe our great days as a nation are ahead of us,” he added.

The Education Minister made the call in response to various media reports that claimed he fabricated reports of a teacher training programme and pocketed the $1.2 million World Bank sponsorship.

Over 40,000 teachers were supposed to be trained on the digital literacy platform under the Ghana Accountability for Learning Outcomes Project (GALOP).

The Minister warned that those doing slash and burn politics and repeating falsehoods many times in the hope that some people will believe it is not going to work.

According to him, he is one minister who has made himself accessible to the media and has regularly honoured invites to a number of media houses to speak on issues in the education sector.

He questioned why he was not approached for his reactions when his ‘enemies’ decided to use the media to spread all the lies against him.

“I’m one person who made himself accessible to you in the last four, five years than many ministers. If you get anything like that won’t you talk to me?”

“Won’t you, if you can’t get me, all my deputy Ministers and there and say there’s something about the Ministry, can you respond to this?”

“But for us to do the bidden of these faceless individuals; and I appreciate that you publish rejoinders but sometimes it is too late for my reputation.”

The Minister lamented that he met somebody at Dallas Airport in Washington DC after Joy FM had recanted the story, who had not heard about that.

“They have not heard about what Joy News said thereafter. What they heard was the first Joy News presentation that propagated a smear campaign against me,” he added.

Dr. Adutwum expressed appreciation for the work the media is doing to educate Ghanaians and assured he will continue to make himself accessible to journalists any day and any time.

He, however, urged the media not to do the bidden of faceless individuals.