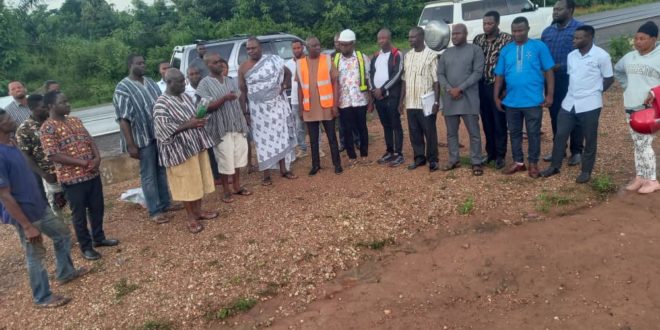 The District  Chief Executive for Kadjebi Municipal Assembly,  Hon Agbanyo Wilson in a short ceremony to cut sod for work to commence on the construction of a new lorry park behind the Agriculture Office at Kadjebi. The DCE thanked the Nananom of the Kadjebi Traditional Area for providing them with land for the new lorry park. The DCE said the assembly’s dream to make sure that Kadjebi gets a new lorry park to ease the congestion at the main lorry park as a dream come through.

Hon Agabanyo Wilson said the new lorry park would generate an income for the Kadjebi District Assembly and also provide jobs for the people to boost the local economy, and subsequently bring a lot of development to the local people in the district.

He gave the contractor only six months to complete the first face of the project and tasked the chiefs to visit the site periodically to check the quality of work done because the traditional chiefs are urgent for change.

The District Engineer of Kadjebi, Mr Anim Samuel mentioned to the people that the project exists in two faces. He said the first face would have a No-2 waiting lounge to carry 20 to 30 passengers, pavement to cover an area of 600 metres square, a No-2 WC seater for both men and women, a fence wall and a ticketing booth.

The site Engineer of SAMMAT Company Limited thanked the Kadjebi District Assembly for allowing them to carry out the project. He also paid a glowing tribute to the Nananom for pledging their unflinching support to see the success of the project. He pledged his commitment to the project and said the company would leave no stone unturned to make sure that they work according to the details of the project.

He also mentioned that because of where President Nana Akufo Addo’s Agenda 111 District Hospital is situated, and how busy the road would become, it would be reasonable to move the lorry park from its current place to a new place to ease both human and vehicular traffic happen every day. He added that the chiefs would not sit down idle and wait for a disaster to strike before they take any action hence releasing the land for the construction of the new lorry park.

He said because the chiefs are the agents of development hence they would select someone from the traditional area to be monitoring the project until its completion.
He finally debunked the assertion that the Kadjebi township would collapse when they relocate the lorry park.