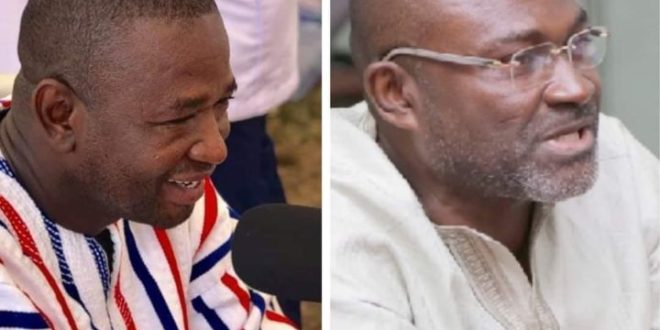 The Northern Regional Chairman of the New Patriotic Party (NPP) has rubbished allegations made against his person by Kennedy Agyapong.

According to Chairman Samba, the allegations by the maverick Assin Central MP is without basis, and same must be disregarded.

KENNEDY AGYAPONG HAS A REPUTATION FOR OUTRIGHT FABRICATIONS.

My attention has been drawn to an audio of Kennedy Agyapong (MP) where he was campaigning to delegates in a region when the General Secretary, acting on behalf of the National Executive Committee (NEC), has placed an embargo on open campaign.

In the said tape, Kennedy Agyapong avowed a lot of misinformation/disinformation to tarnish my image.  As it is one sided perspective, I will tell my side of the story for the public to form an opinion from his thesis and my antithesis.

Facts:
1. Neither I nor my Regional Executives were informed that Kennedy and his team would be coming to the Northern region.

2. The claim that the NPP Regional Executives prevented Kennedy from meeting delegates is an outright lie by Kennedy and this is consistent with his known character, FABRICATIONS. Whereas the party is entitled to prevent any such campaign meetings by virtue of the directives issued by the General Secretary on behalf of NEC, no such request for a meeting was made by Kennedy and turned down by the party.

4. I strongly condemn his unprovoked attacks on the Vice President whose efforts and sacrifices contributed hugely to returning the NPP twice into office with its attendant benefits to Kennedy, myself and many party people across the country. If his likes would not honor the Vice President for his work for our party, they should not be attacking him unprovoked.

5. For a man seeking to lead a noble party like the NPP, Kennedy’s conduct and pronouncements must mirror what the NPP is noted for- respect, decorum, dignity and civility in speech.

6. No one will be prevented from campaigning. Competition helps the party to progress and as a liberalist I will encourage competition.

7. Accordingly, I am by this statement asking Kennedy Agyapong to withdraw his fabrications against my person and render an apology within two weeks. Failure or refusal to do as requested would lead me to my lawyers.

I'm Adwenpa-Hene |Blogger & Broadcaster Journalist. I am the CEO and manager of this noble website. I publish on Entertainment, Sports, Politics, Lifestyle, and Technology. You can also follow Us on : YouTube Channel - My Ghana Media TV, Facebook - MyghanaMedia TV , Twitter - @MyGhanamedia2 & Instagram - My Ghana Media TV. Email Address: [email protected] Contact Us: 0200818719
@@MyGhanamedia2
Previous Gov’t To Reintroduce Road Toll In 2023
Next ‘The Exchange Rate Was ₵4.20 Now It Is ₵15’ – Ken Agyapong Shades Bawumia Over Empty ‘Economic Theories’