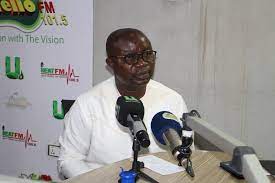 Chief Executive Officer of the Kumasi Metropolitan Assembly, Osei Assibey-Antwi has withdrawn from the mayorship race.

The mayor, including other 8 other persons picked forms and have gone through vetting process to cling the ultimate position within the metropolis.

“As special aid to the Mayor, I can confirm that Mr Osei Assibey Antwi has declared his intentions to discontinue his mandate as mayor for Kumasi”

Reasons for the mayor’s withdrawal from the race is not immediately clear.

From The Combine Kejetia Traders Association.

July 1st 2021
For Immediate Release
KEJETIA TRADERS IN SHOCK OVER HON OSEI ASSIBEY ANTWI’S WITHDRAWAL FROM KUMASI MAYOR RACE.
The sudden news of Hon Osei Assibey Antwi’s withdrawal from the Kumasi Mayor’s race has come to the attention of Combined Kejetia Traders Association within Kumasi Metropolis as a shock.
We must admit that we were taken aback when this news cropped up in the media circles because we were of firmed believe that Hon Osei Assibey Antwi has the required capacity to push forward President Akuffo Addo’s agenda in the Kumasi Metropolis as Cheif Executive Officer.
We the combined trading group is solely committed and loyal to the great Asante Kingdom and the New Patriotic Party (NPP) and for that matter, we cannot sit unconcerned to let this sad event take place without venting out our pains.
The Combine Kejetia Traders Association including, Kejetia traders Association, Eleven Member steering committee at the Kumasi Central Market, Concern Central Market Traders Association, Federatione Traders Association and Central Market Petty Traders Association have together with Hon Osei Asibbey Antwi worked so hard and achieved the unprecedented milestone the city has chalked in the last few years.
Therefore, we have a duty to jealously protect the supreme interest of Kumasi and support competent persons who have already demonstrated good leadership.
It is an undeniable fact and public knowledge that Hon Osei Assibey Antwi is one of the most hardworking Mayor’s Kumasi has seen in the last few years.
The rapore between Mayor and we the traders has always been good and that is the main reason he could relate peacefully with all trading groups in Kumasi despite the numerous challenges he encounted.
One of the unprecedented achievements by Hon Osei Assibey Antwi is how he single handedly managed to get all satellite markets in the Kumasi Metropolis to partially close on the election day to canvass votes for the great NPP.
For the first time in recent years under his administration as Kumasi Mayor, all markets in the Kumasi Metropolis were closed down from 6 a-m to 12 p-m on December 7th 2020(Election Day) just so to ensure that all traders go out and vote massively for president Akuffo Addo.
This move we can say payed off as almost all our members went out to vote for the NPP to retain power. As part of plans to properly relocate traders from the Kumasi Central Market to pave the way for the reconstruction of the Phase 2 Kejetia Market, Hon Osei Assiby Antwi was able to prepare for all the affected traders in the city.
The Kumasi Metropolitan Assembly (KMA), led by Osei Assibey Antwi, has worked tirelessly to develop a portion of the spacious Race Course in Kumasi into a market to accommodate the affected traders when it became necessary.
Hon Osei Assiby Antwi was able to move about 9,000 traders from central market to the newly constructed facility which shows how strong and committed he is as mayor.
We are therefore commending Hon Assibey Antwi for the good legacy he will be leaving behind as one of the impactful Mayors who not only served his party well but also the good people of Kumasi in general.
On this note we calling on Hon. Osei Assibey Antwi to rescind his decision and join the Mayor race as we are patiently waiting you to continue the good work that we started together for Kumasi developed.
The Combined Kejetia Traders Association would end here by wishing Hon Osei Assibey Antwi the very best of luck in his endeavours but consider to rescind your descision.
Signed
1..Nana Prempeh… President, Federation Traders Association
(0243272873)
Kwabena Fosu, MK…. Operations Manager… Concerned Central Market Traders Association
(0243777417)
See also  Audit Service Uncovers Financial Irregularities At KMA