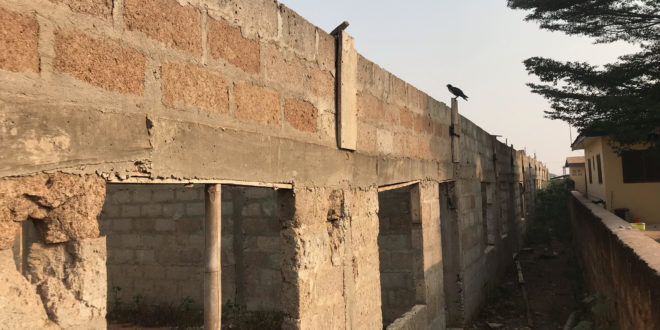 Youth of Kromoase in the Atwima Kwanwoma District have scolded the Ashanti Regional Chairman of the New Patriotic Party, Bernard Antwi Boasiako, aka Chairman Wontumi for neglecting his duties as the contractor of an uncompleted six-unit classroom building.

They have further cautioned the incumbent government to take responsibility in the District before 2024 else they will vote them out in spite of their love for the NPP.

They narrated that the six-unit classroom block was started in 2019 by president Nana Addo Dankwa Akufo Addo to address the infrastructural deficit in the school yet the contractor, Bernard Antwi Boasiako has failed to complete the project which is affecting pupils’ academic performance.

The lack of toilet facility in the school was also voiced out, with the place now housing mentally ill people.

One of the resident on condition of anonymity told Pent TV that the Assembly is refusing to make to complete the project, with all fingers pointing at the Ashanti Regional Chairman of the NPP for impeding on the progress of the school.

“You have witnessed the manner of school that accommodates children in this village. Imagine, is this not shameful? Where they will attend natures call is even missing,” he said.

“The project they were embarking have been abandoned and if this was what the situation was going to be, we would have organized ourselves to build our own school.

“My advice to the contractor, Chairman Wontumi is not to be too complacent that he is of the NPP and so as long as we are in the Ashanti Region, they will win heavily at Atwima. NPP is not Chairman Wontumi’s family asset so if he is given a role, he need to act to the benefit of Ghanaians.”

The Assembly member of the Kromoase Afasiebon Kotokuom Electoral Area, Hon Emmanuel Amissah pleaded to the District Assembly and Chairman Wontumi to resolve the challenge associated with the six-unit classroom project to heighten teaching and learning for the pupils.

He told that the Atwima Kwanwoma District Assembly is one of the NPPs stronghold therefore their neglect means they have been denied the National cake which is very unfair, compared to their dedication to the course of the NPP.

He further called on non-governmental organizations to come to their assistance and complete the project for them.

“This is a stronghold of the NPP and a population of over 7000. If this is how things will be, it means there is no need for voting. We beg the contractor to come to our aid for we need their help.