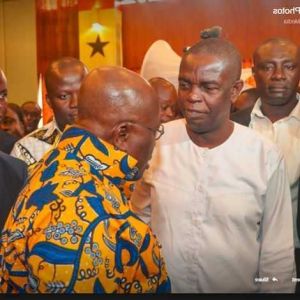 Kwesi Pratt Reveals Conversation He Had With Prez Akufo-Addo

Veteran journalist and Managing Editor of the Insight Newspaper, Kwesi Pratt Jnr, has revealed a conversation he had with President Nana Addo Dankwa Akufo-Addo on the latter’s politics as a young man.

Pratt authoritatively alleged that Akufo-Addo as of 1966 was a card bearing member of the Convention Peoples Party, the ruling party which had been overthrown by Afrifa and Kotoka on February 24 that year.

Of the persons who had been listed to be arrested by the then military junta, young Nana Addo Dankwa Akufo-Addo – at the time a 22-year-old – was part.

On a Pan African TV programme which formed part of the 21st September Founder’s Day event, Pratt said: “By February 24 (1966), the day of the coup, Nana Addo Dankwa Akufo-Addo was a card bearing member of the Convention Peoples Party.

“You know how he changed? His father worked for those people, he was part of those people. He was on a list of persons who were supposed to be arrested in February 1966 and he told me this story. It is not that I heard the story from somewhere.

“The current president Nana Addo Dankwa Akufo-Addo told me himself about how he was to be arrested on that day because he was a member of the CPP,” Pratt asserted.

On how Akufo-Addo escaped arrest, Pratt revealed that it all came down to family connections, primarily because his father (an opponent of the CPP government who supported the junta) got his name removed.

“His father was with them, they wriggled their way and took his name off the list of those to be arrested. That is how he joined the Danquah – Busia people and today he is your president,” Pratt added.

He added that Akufo-Addo was involved in the then CPP government as a “card bearing member and advocate of Nkrumah,” so by extension any wrong the first President engaged in, Akufo-Addo had a share.