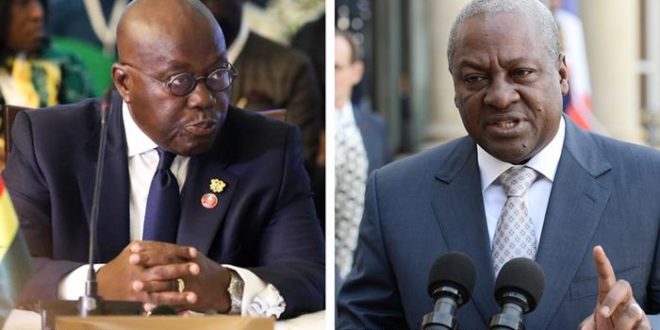 Former president of the Republic, John Dramani Mahama has shaded President Akufo-Addo for priding himself in election victories rather than working for the people.

President Akufo-Addo has said recent criticism of his government by former President John Mahama is an indication that the ex-president is finding it difficult to accept his defeat in the 2020 presidential election.

Speaking in an interview on a Ho-based radio station to wrap up his two-day tour of the Volta Region, President Akufo-Addo noted that Mr. Mahama is still confused about his defeat and has lost control of his comments against the government.

See also  Akufo-Addo Appointed Former MCE For Akuapem North, Dennis Aboagye As Director Of LGD&RD In The Office Of The President

In a tweet made by the former president on Thursday, September 15, 2022, in a responses to President Akufo-Addo’s statement, he [Mr John Mahama]  said the mentality is really a problem for Ghana.

He says he expected the president to salvage the citizenry from the economic turmoil they’re being subjected to, and create opportunities for them than to jubilate over his election successes.

Our country has a really big problem when the President's pride is only in how many elections he has won, rather than how he can alleviate the suffering of the people and create opportunities for them.#Ghana.

“Our country has a really big problem when the President’s pride is only in how many elections he has won, rather than how he can alleviate the suffering of the people and create opportunities for them,” he tweeted.

I'm Adwenpa-Hene |Blogger & Broadcaster Journalist. I am the CEO and manager of this noble website. I publish on Entertainment, Sports, Politics, Lifestyle, and Technology. You can also follow Us on : YouTube Channel - My Ghana Media TV, Facebook - MyghanaMedia TV , Twitter - @MyGhanamedia2 & Instagram - My Ghana Media TV. Email Address: [email protected] Contact Us: 0200818719
@@MyGhanamedia2
Previous Queen’s Funeral: ‘Extraordinary’ To Invite China – Senior Tories
Next Price Of Pork To Go Up By 20% Effective September 20