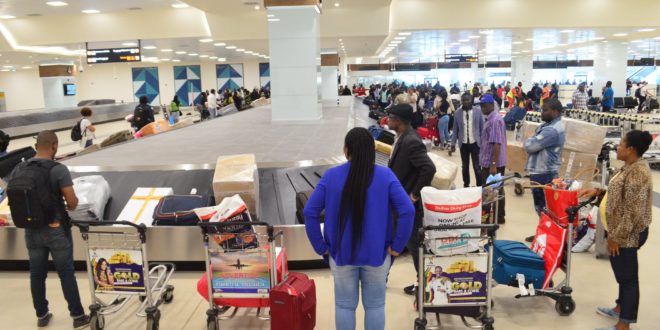 The Management of the Ghana Airport Company Limited (GACL) has confirmed that on Friday, June 17, 2022, a middle-aged male passenger arrived onboard United Airlines at the Kotoka International Airport (KIA) from Dulles International Airport Washington at approximately 10:20 am in the company of a relative.

A statement issued on Saturday, June 18 said the passenger was reported to have complained of tiredness and had difficulty in breathing.

He was subsequently offered a wheelchair by the Ground Handler. The passenger became unconscious at the arrival hall and received medical attention but was unresponsive.

The statement indicated that he was conveyed to the airport clinic for further attention and he subsequently passed on.

“In line with protocols, the Airport District Police station was immediately informed.

“Ghana Airport Company Limited has commenced an investigation into the incident.

“Management extends its deepest condolences to the bereaved family,” the statement said.

I'm Adwenpa-Hene |Blogger & Broadcaster Journalist. I am the CEO and manager of this noble website. I publish on Entertainment, Sports, Politics, Lifestyle, and Technology. You can also follow Us on : YouTube Channel - My Ghana Media TV, Facebook - MyghanaMedia TV , Twitter - @MyGhanamedia2 & Instagram - My Ghana Media TV. Email Address: [email protected] Contact Us: 0200818719
@@MyGhanamedia2
Previous Central Region: Prison Officer Washed Away By Floodwater, Body Yet To Be Retrieved
Next Eye Witness Challenges Account Of Ghana Airport Co. Ltd Over Death Of Passenger From US