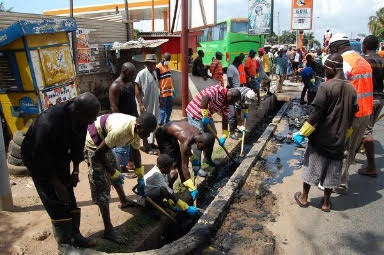 The Kumasi Traders and Kumasi Metropolitan Assembly have collaborated to embark on a massive cleanup exercise ahead of the Asantehemaa’s 5th Anniversary.

The exercise which will be held on Saturday 5th February 2022, will be seen through that all shops within the metropolis will be closed between the hours of 6 am to 12 pm and those which will flout this directive will be dealt with accordingly by authorities.

In a press release on Wednesday, 2nd February 2022, the organizers wrote;

“Kumasi Traders in collaboration with Kumasi Metropolitan Assembly (KMA) to close all Shops on Saturday for massive clean-up exercise ahead of Asantehemaa’s 5th Anniversary.

We the leadership of the 66 member associations are appealing to traders to closed their shops between the hours of 6am to 12pm on the said day to allow for a massive clean-up exercise within the metropolis in support of the 5th Anniversary of the enstoolment of the Asantehemaa Nana Konadu Yiadom III which is expected to come off on 6th February to 16th February, 2022 at Dwabrem, Manhyia Palace.

This decision was arrived after constants deliberations with KMA and our trading groups which consist of over 10,000 traders in our 66 member associations in greater Kumasi.

We traders in Kumasi and the Ashanti Region as a whole want to state it emphatically that, we have come together and pledged our unflinching support to the 5th Anniversary of our affable Queen Mother who practically owns every single market in the Region.

We believe embarking on this exercise ahead of the event will not only bring honor to Asanteman but will also make the anniversary more colorful.

We are therefore urging all schools, institutions, workers and groups in the greater Kumasi to clean their respective areas on the aforementioned day in solidarity with our Queen mother’s anniversary.

Since we are collaborating with the Kumasi Metropolitan Assembly, we are urging them to use this opportunity to relocate all traders on pavements in the city in order to ensure free passage of all visitors who would wish to use the ceremonial routes in the city during the anniversary.

We the traders are ready to support the assembly in every measure that will ensure the removal of all traders on pavements to other satellite markets before the final anniversary celebration.

We are finally urging the general public to participate fully by cleaning around their surroundings and workplaces.