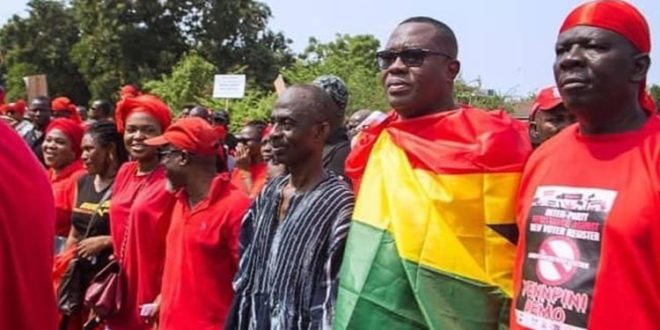 Information Minister, Kojo Oppong Nkrumah has said actions taken by the NDC “Arise Ghana Demo” to fight the Police is an obvious attempt by the opposition party to create instability in the country.

According to him “There is an obvious attempt to create instability in our country at this time, we don’t need to mince words about it. There is a trajectory, first, there was a group, that wanted to demonstrate with weapons, thas this group said they wanted to demonstrate throughout the night till the following morning. The Police raised obvious security questions against that”.

He noted that the Police should be commended for the high level of professionalism they exhibited during the demonstration by members of the Arise Ghana pressure group on Tuesday, June 28.

Speaking on the issue, he noted that, even when they were attacked by the demonstrators, the officers remained calm and carried out their assignment.

“First, we should commend the Policemen and women for their professionalism. IGP was very clear that [the demonstrators are supposed to be your brothers and sisters, treat them with decorum, assist them to exercise their constitutional right under Article 21(1)(d) which gives you the right to join an assembly to protest as you please”.

“Even when they were attacked by these persons, though they had a superior force that they could use even in their defense, in compliance with the instruction of their superior they still kept their calm and did their best to control the situation”.

“This is even daytime, broad daylight at Obra Spot here at Accra, you have people attacking Police in this manner, can you imagine what could have happened at night if some of these things were allowed to continue throughout the night,” he said on the Good Evening program Tuesday, June 28.

See also  Prince David Osei To Akufo-Addo: We Will Protest Against You If Things Don’t Change By December

The Police announced that 12 officers have been injured during the demonstration by members of the Arise Ghana pressure group on Tuesday, June 28.

The injured officers have been transferred to the Police hospital in Accra for further treatment.

“Some Police vehicles have also been damaged,” the Police said in a statement.

The Police further described the development as shameful.

“What a shame, we were there to protect you and ensure your safety, but you throw stones at us, injure and hurt us. This behavior is unacceptable and must be condemned.”

The police hereby caution these individuals who intend to foment trouble to desist from such an unlawful conduct as the police will take all necessary professionally driven measures to enforce the law and protect life and property. pic.twitter.com/dCD3oX5KCj

Demonstrator Spotted with Weapon at El-Wak

The Police have spotted a demonstrator, Joshua Akamba with a weapon among the crowd of demonstrators gathered around the El-WakStadium, today, 29th June, 2022. pic.twitter.com/QTCgGl5T5u

He was duly advised by the Police to put the weapon away after his attention was drawn to the illegality associated with such an act. He was also urged to notify other demonstrators to desist from carrying offensive weapons during the demonstration. pic.twitter.com/7V8WdT3QcN

Meanwhile, the government spokesperson on governance and security, Palgrave Boakye-Danquah, has said Ghanaians must ensure the setting up of a good model of demonstrating in the country.

Boakye-Danquah said this will ensure that the peace of the country is always upheld.

Speaking with Beatrice Adu on The Big Bulletin Tuesday (28 June) on Asaase Radio, he said he is tempted to believe that the Arise Ghana demonstration is a rebranding of the actions of the #FixTheCountry movement.

Boakye-Danquah said, “I think that it’s a bit more of rebranding [#FixTheCountry] but we need to ensure that we are setting up a good model of demonstrating and agitating, and exercising your democratic right. In the midst of that, it is not the burning of tyres; it is not the throwing of stones against the police that want to protect you. There are intellectuals among the demonstrators and they know very well that what they are doing is not very helpful for the peace and sanctity of this country.”

“Government is there to meet all the needs of the Ghanaian people. And I do not think the government is oblivious to all the challenges that are bewildering this world which is why we have made pragmatic steps to address these issues,” he added.

He said the government is prepared and able to address the challenges facing the country adding that “people must trust the government”.

But a leader of the group who is also Communication Officer of NDC, Sammy Gyamfi dismissed claims that members threw stones at the Police during the demonstration.

He described the persons who exhibited that conduct as agent provocateurs who were planted in their midst by the Police.

They are agent provocateurs planted in their midst by the Police, these are not members of the Arise Ghana. We arrested them and gave them to the Police.

He added, “our hands are clean, our conscience is clean, we believe in what we are doing.”

Sammy Gyamfi further accused the Police of embarking on Public Relations (PR) gimmick to brand the demonstrators as violent citizens.

“If you look at the statement being issued by the Police on their social media handles, you can see through the PR gimmicks being mounted by the Police.